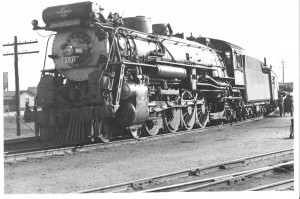 Texas & Pacific Class M-1 4-8-2 Mountain No. 901 heads the Sunshine Special at Marshall, TX, in June 1934. Missouri Pacific touted the train to be “Out of St. Louis at Sunset into Texas at Sunrise!” The Sunshine Special is explored in the January/February 2013 Cowcatcher Magazine. – Courtesy Harold Vollrath collection

Author Joel Rosenbaum offers retrospectives on trains that roamed Texas, Oklahoma, Arkansas and Louisiana from days gone by regularly in the Cowcatcher. Below is a list of stories by issue on some of the region’s famed railroads, engines and trains:

Texas Electric was a giant in its time – September/October 2010

Travel to Dallas was often via Paris – March/April 2011

Firefly was a homegrown streamliner – November/December 2011

Missouri Pacific’s crew of one rolled on – March/April 2013

Under the Dome – November/December 2013

City of Miami was a rolling tropical splendor – January/February 2015

From Mandy the Mule to PCC street cars – January/February 2016

To order one or more of these retrospectives, click here!