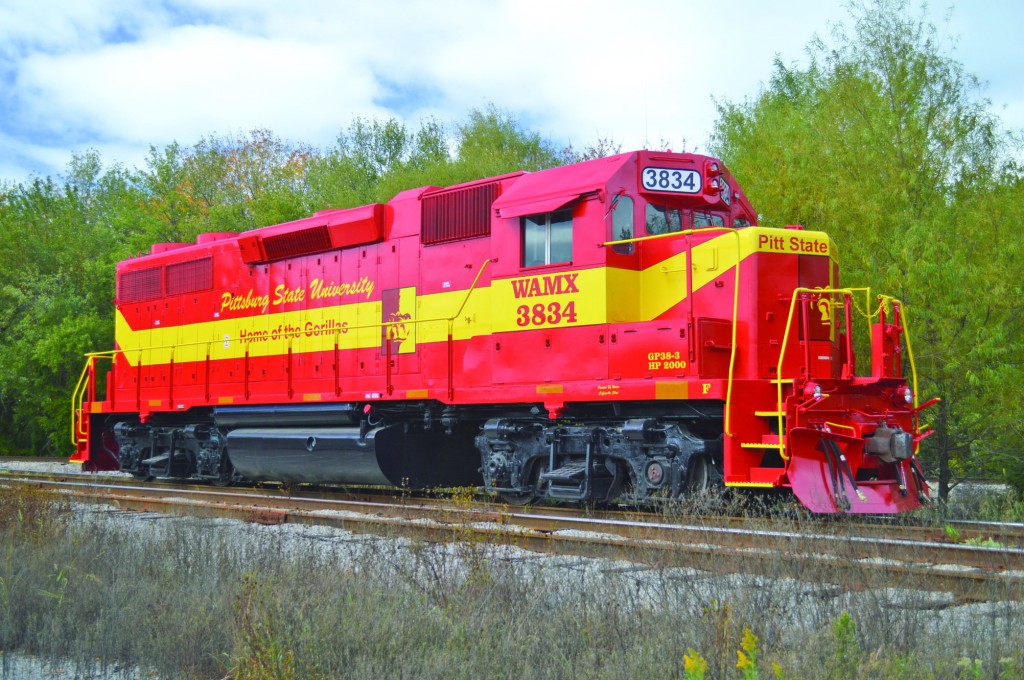 WAMX No. 3834 idles at a siding southwest of Pittsburg, TX on Thursday. The locomotive, painted in Pittsburg State University colors, rolled into town this morning to recognize PSU’s homecoming. – Courtesy Watco Companies

Watco Companies debuted today WAMX No. 3834, a GP38-3 that’s painted in Pittsburg State University’s colors to recognize the university during its homecoming week. The locomotive rolled into Pittsburg, KS this morning and was parked near downtown for a short ceremony before university and Watco officials, and the school’s mascot, a gorilla.

Onlookers and students were allowed on the locomotive, which was painted at Watco’s Coffeyville, KS shops.

After the ceremony, No. 3834  was moved to a siding southwest of town where it will remain until Saturday. The locomotive will be brought back into town and parked on Broadway Street for the school’s football game.

“Watco has a great relationship with Pittsburg State University and many of our team members are alums of Pitt State,” said Tracie VanBecelaere, Watco communications director. “We thought this would be the perfect way to let everyone see just how proud we are of our Gorillas.”

This is the fourth Watco locomotive to be painted in school colors and PSU is the first NCAA Division II University to receive the honor. The only other university to receive an official, custom paint job is the University of Alabama. Cherryvale High School received the honor last year to commemorate the opening of the Cherryvale Yard and Boise Valley Railroad has a locomotive similar in color to Boise State University.

“I don’t know of another university that enjoys such strong support from its community,” said PSU President Steve Scott. “We’re fortunate to have home-grown industries such as Watco in our city, and I know that this locomotive will be a source of pride for Gorillas throughout the world.”

“We were under a pretty tight timeline,” explained Kenny Rowell, shop foreman. “A normal paint job would take us about 125-150 hours, but the design on this one was quite a bit more complex. By the time it was all said and done, we put in more than 300 hours on it. It was hectic, but we wanted to have it ready for Homecoming. I really think it was worth it.”

“The Gorilla” has already generated buzz with rail fans throughout the nation, and many will likely make their way to Pittsburg to see the locomotive in person.

“Rail fans have a great deal of passion for these engines,” said VanBecelaere. “They love the history, they love the new paint jobs and they love to follow where these locomotives travel. I had a gentleman call me last week to ask me about ‘The Gorilla’ because he’d heard about it online. It’s another way Pittsburg State is making national news.”

More on this story.