Watco Companies, LLC is bucking the recent trend by railroads to honor their predecessor roads by painting locomotives in heritage schemes. 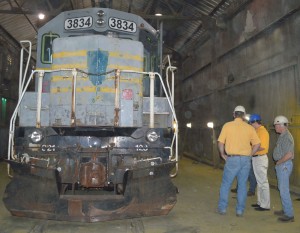 At Watco, which operates 23 short lines, painting its locomotives to honor an educational institution in a town that the company services is becoming a routine public relations move much closer to home.

Watco plans to roll out a GP38 painted in Pittsburg State University’s red and gold scheme in time for the Kansas school’s homecoming football game Oct. 20. WAMX No. 3834 will be the fourth locomotive that Watco has painted to recognize either a university or high school.

The unit is expected to arrive in Pittsburg the day before PSU’s game against Missouri Western.

“I don’t know of any other railroads out there that honor schools like we do,” Watco spokeswoman Tracie VanBecelaere said.

In summer 2011, Watco unveiled a blue and white SD40-2 in the colors of Cherryvale High School. The company also has painted engines to honor Boise State University and the University of Alabama.

Watco’s latest entry in its unofficial textbook scheme is a former Bangor & Aroostoock Geep that’s being painted at Watco’s Coffeyville, KS, shops. The “split” Pittsburg State Gorilla logo will go on the nose, sides and rear.

VanBecelaere said the locomotive doesn’t just honor the school’s success on the football field but also recognizes what the university means to the city and to Watco. Last year, PSU won the Division II national championship, and this year the Gorillas are ranked No. 1.

“We have a close association with PSU,” she said. “Their football players will stick around in the off season and work for Watco, doing summer jobs like mowing and maintaining properties.” 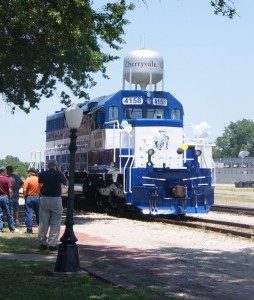 Special paint, like that used on the Cherryvale locomotive, is being applied to prevent permanent damage from graffiti. VanBecelaere said the paint will allow graffiti to be easily removed with a spray solution.

When finished, No. 3834 will operate on the South Kansas & Oklahoma Railroad in and around Pittsburg on manifest trains.