Union Pacific 4-8-4 No. 844 rolls into Houston’s Amtrak Station on Friday to culminate the “UP 150 Express” tour, a nearly year-long cross-country trek that celebrates the railroad’s 150th anniversary. The steam locomotive will be on display until Oct. 28 before returning to Cheyenne, WY. 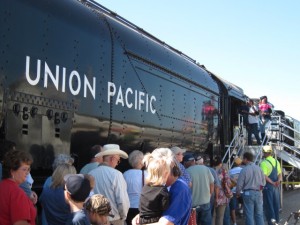 Union Pacific No. 844 recently headlined the 100th anniversary celebration of the Texas & Pacific Railway depot in Marshall, TX. The steam locomotive will be on display in Houston Friday through Sunday, culminating the UP 150 Express tour. – Courtesy Norman Buell

Houston Mayor Annise Parker will serve as honorary engineer when the steam locomotive and train arrives on Friday. Union Pacific officials will join the Mayor aboard the locomotive and proclaim Houston as an official Train Town at an arrival ceremony that kicks off the weekend-long celebration. Mayor Parker will be presented a resolution signed by Union Pacific Chairman Jim Young.

“Our 150th anniversary is a milestone that provides us with the opportunity to thank our communities for supporting Union Pacific,” said Joe Adams, UP vice president, public affairs, southern region. “We are happy to celebrate our past and proud to commemorate more than a century and a half of progress with the city of Houston.”

The celebration runs from 10 a.m. to 4 p.m. Saturday and Sunday. The event is free, and the first 500 to arrive on Saturday will receive a limited-edition Union Pacific 150th anniversary pin.

In addition to getting a close-up look at the steam locomotive, visitors can step inside Union Pacific’s vintage Promotory baggage car that has been transformed into a state-of-the-art traveling museum. The traveling display closely replicates the full-scale Building America exhibit that opened earlier this year at the Union Pacific Railroad Museum in Council Bluffs, IA.

On Monday, No. 844 departs Houston and will make the short trip to Hearne, TX for its last public display in Texas. The steam locomotive and train will be on display through Wednesday, and won’t be accessible to the public again until Nov. 6 in Pueblo, CO.

After the layover in Hearne, the train heads to Fort Worth on Thursday and is expected to arrive at the T&P Station at about 3 p.m. for an overnight stop.

Once finished in Fort Worth, the UP 150 Express begins a more direct route to Wyoming via Wichita Falls and Amarillo, where short stops are planned. No. 844 will trek through New Mexico and Colorado, including a layover in Denver, before its scheduled arrival Nov. 8 in Cheyenne.

As No. 844 weaved its way south, online reports of stops in Kansas, Oklahoma and Texas surfaced daily to document the hundreds of onlookers, including public officials, who got a glimpse of the last steam locomotive built for UP.

A good crowd turned out Saturday at the former Texas & Pacific depot in Marshall, TX to view the train, which was on display for the depot’s 100th anniversary celebration.

Clint Schelbitzki, UP’s director of public affairs, presented Mayor Ed Smith with a proclamation to kick off the celebration. No. 844 was on display through Sunday.

“We are proud to recognize Marshall as we commemorate our railroad’s sesquicentennial celebration and growing up together,” Schelbitzki said. “Union Pacific has been part of the country’s fabric throughout the railroad’s 150-year history. Our shared heritage with Marshall is a source of pride as we remember our past while serving and connecting our nation for years to come.”

Southern Pacific Railroad built the first rail line to serve Marshall in 1858, connecting the community to steamboats arriving at the port on Caddo Lake. In 1872, voters approved a $300,000 bond to help Texas & Pacific Railway expand a rail line towards San Diego, CA. The railroad brought hundreds of new citizens seeking employment. When the line was completed, Marshall became known as the “Gateway to Texas” because it was at the beginning of a rail line that stretched across Texas and into California.

T&P merged with the Missouri Pacific Railroad in 1976 and Union Pacific began operating service to Marshall after it acquired MP in 1982. It helped the city preserve Marshall’s historic depot, which was built in 1912. The restored depot includes an Amtrak station and a railroad museum.

In Ennis, TX, the train arrived on Oct. 18 before curious residents and train chasers, as well as the mayor and Congressman Joe Barton, for an afternoon stop. The conductor and locomotive engineer, along with Union Pacific representatives, visited with the crowd while the train was parked at the town’s depot.

One resident asked the train crew to autograph a firebrick from an old steam engine that the man had found out his house.

In Paola, KS, children who were out of school for the day mingled among a large crowd gathered at the Peoria Street railroad crossing on Oct. 15 to catch a look.

The UP 150 Express, which spans 13,000 miles, commemorates 150 years since President Abraham Lincoln created UP by signing the Pacific Railway Act.