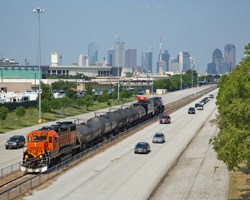 The “Big Boy” will be on the move shortly to its new home in Frisco, TX.

Officials at the Museum of the American Railroad got the word about 10 a.m. today from BNSF Railway that the second leg of moving the Union Pacific steam locomotive should begin at 9 a.m. Sunday. Within minutes of the news, calls began coming into MAR’s office at the Frisco Heritage Museum within minutes.

“The word is out,” MAR CEO Bob LaPrelle said with a grin.

The locomotive has been holding over in Irving since Sunday, following its departure from its longtime home in Fair Park in Dallas. Last weekend, crews pulled the steam engine to the interchange point between the Dallas, Garland & Northeastern Railroad and BNSF Railway in South Irving.

Steam locomotive expert Scott Lindsay of Steam Operations Corp. arrived Friday morning from Birmingham, AL, to assist with Sunday’s move. If Big Boy performs as well as it did on the first leg, Sunday’s move should go off without a hitch.

“It ran just like it was supposed to,” he said. “There were no exceptions, as we say in the business.”

As hundreds cheered, No. 4018 moved flawlessly with no mechanical issues over the entire route in its return to the mainline for the first time in 48 years. The 70-year-old locomotive has been on static display since the museum acquired it in 1965.

“It’s a real testament to the American Locomotive Company’s design and manufacturing practices back in 1942,” LaPrelle said. “Today it would be considered overbuilt, but in its time Big Boy was simply rugged and reliable.”

Lindsay and the museum’s Steam Team have been working since the spring on readying No. 4018 for the move, and the work has paid off so far. Lindsay said the locomotive performed without exception in his 10 mph ride across town last weekend. Leaving Fair Park, the locomotive and tender well-handled the tight curve outside the gates of the former museum site that had concerned officials.

“All the prep work on the front end paid off on the back end,” he said. “The time that we spent at Fair Park in the in the hot sun, those long days, it all paid dividends.”

On Monday, cars drove slowly by MAR’s site off the Dallas North Tollway hoping to get a peak of the Big Boy after reports aired earlier in the day that it could arrive by afternoon. At least two Dallas/Fort Worth television stations broadcast live spots detailing the move.

“Is she here yet?” called out one City of Frisco employee to a bystander near the fence. “We heard it was supposed to be here today.”

Much care was given to the world’s largest steam locomotive, at 133 feet and weighing in at 1.2 million pounds, to get it as far as it’s gone.

The entire route between Fair Park and Frisco was inspected, including bridge load capacities and degree of curvature along the line. Extra care was given to the locomotive’s long wheel base during preparations and throughout the move. Safety was paramount as well as avoidance of any delays to freight and passenger traffic along the way. Museum volunteers worked in concert with railroad employees to ensure a safe and successful move.

LaPrelle said MAR is indebted to the railroads for providing transportation of the Big Boy to Irving. Using a locomotive furnished by BNSF, DGNO dedicated two crews to the all-day effort at no cost to MAR. He also praised Trinity Railway Express for its cooperation and support of the move between Downtown Dallas and South Irving.

With the Big Boy in Irving, DGNO is finished with its portion of the move. The shortline has played an integral role in helping move much of the museum’s collection, in addition to the Big Boy, to Frisco.

“We will miss our friends at DGNO as we move off-line to a new home, but we are committed to preserving their legacy as part of our nation’s railroad heritage,” LaPrelle said.

The locomotive is sitting on private property adjacent to a busy commuter line and is not accessible by the public.

LaPrelle didn’t speculate on how long it would take to make Sunday’s move and when it would arrive Frisco.