DALLAS, TX — The Museum of the American Railroad has set a tentative schedule to begin moving its signature steam locomotives to Frisco, TX, in what will be the final steps to relocating the half-century-old museum from Dallas’ Fair Park to the suburbs.

The museum has already moved much of its 40-piece collection, including 10 pieces that were transported in mid-April, to its new location north of Dallas. 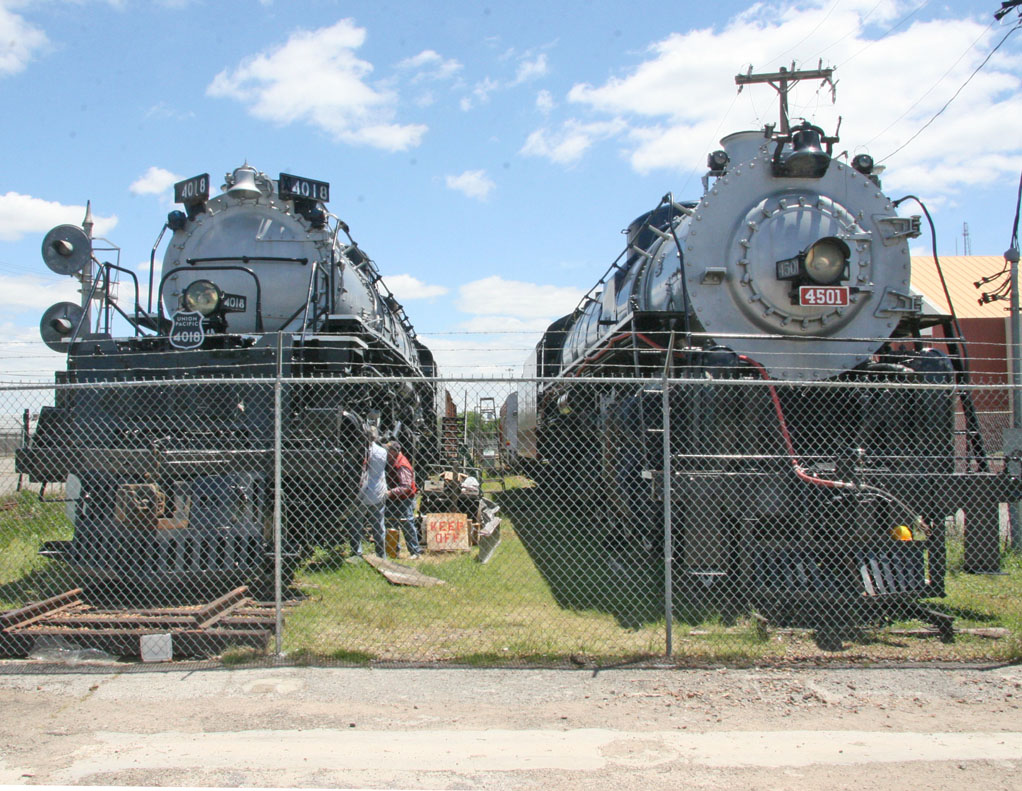 The Museum of the American Railroad’s Union Pacific ‘Big Boy’ (left) and Frisco ‘Meteor’ are being prepared to make the move to Frisco, beginning as early as May 19. – Tim Blackwell/Cowcatcher Magazine

MAR announced on its website Saturday that Frisco “Meteor” No. 4501 is tentatively scheduled to move May 19. “Big Boy” Union Pacific No. 4018 will move “within a few weeks” – likely on a Sunday – of the Frisco engine. The locomotives – along with the F7A Santa Fe diesel and two storage box cars – are all that remain in Dallas, where the museum first set up shop in 1963.

Moves of both locomotives will be made during the day to prevent any disruption of Trinity Railway Express operation between Dallas Union Station and Irving.

While the most difficult moves still lie ahead, CEO Bob LaPrelle said excitement is building as MAR enters the final stretch of a relocation that began five years ago with Frisco’s donation of 12.34 acres to provide a new home for the embattled museum. MAR has been in a struggle with the City of Dallas, which wants to acquire the property for additional space for the State Fair of Texas.

“It’s nice to kind of see the end of it now,” he said in April at MAR’s Thomas the Tank fundraiser in Grapevine. “Once we get out of Fair Park, we’ll be done and we can move on.”

Nationally known steam locomotive specialist Scott Lindsay of Steam Operations Corp. returned to Dallas in late April to prepare the pieces for the move. He and a handful of museum volunteers have been working daily on No. 4501 and No. 4018 and their tenders servicing axles – draining, cleaning and repacking each journal box with lubricating pads and oil. The “Meteor’s” driving wheels will require special attention, with each Hennessey lubricator being bench-tested before reassembly.

All in all, Lindsay, a 36-year veteran of steam rehabilitation and repair, says both locomotives are in good shape considering their age and conditions they’ve experienced outdoors. Most of the heavy lifting is done and all that remains is ensuring that they can be towed.

“The big mechanical work is almost finished,” he said Sunday after working about six hours with four volunteers at Fair Park. “We’ve been checking for any issues. There are a few mechanical things to do, but the list is dwindling. We’ll be ready to start getting them out of here soon.” 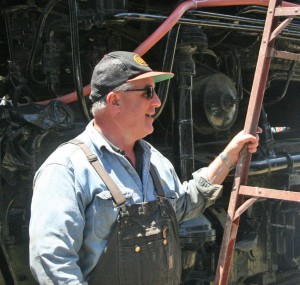 Scott Lindsay, who is coordinating the move of Nos. 4501 and 4018, is a 36-year veteran of steam locomotive rehabilitation and repair. – Tim Blackwell/Cowcatcher Magazine

This week Lindsay plans to move both locomotives, which haven’t rolled since last spring, inside the perimeter of the former museum site, which is beginning to resemble an abandoned rail yard. The F7A diesel painted in Santa Fe Warbonnet colors, which sat behind the “Meteor”, will provide the power.

“We’ll move both locomotives back and forth inside the fence and put some miles on them,” he said.

Weather permitting, Signage Systems will apply the “Meteor” graphics to No. 4501 during the next week. The company, a long-time supporter of MAR, developed the paint masking for the project.

When it departs Fair Park, the locomotive will roll at a maximum speed of 10 mph once out on the mainline. Five modern freight cars coupled to each end will be used for additional braking. Plans are being finalized for additional logistical needs, including inspection points along the route.

Once the “Meteor” is moved, attention will turn to the “Big Boy”. Work has already begun to drain and refill each bearing reservoir on the driving wheels with heavyweight gear oil. The locomotive’s side rods will be either removed or lubricated from temporary manual drip-type lubricators.

“We’re going in and closely inspecting every bearing box on the Big Boy,” LaPrelle said. “We had a little water in the boxes, so we’re watching that.”

To help the massive 4-8-8-4 locomotive and tender manage a tight curve beyond the first switch at Fair Park, the three axles on the “Centipede” tender will be blocked. The wheels will be jacked up and have spacers placed such that the flanges are above the rail head in hopes of eliminating a derailment.

LaPrelle said the museum found some Union Pacific mechanical records from the mid-1960s that suggested the technique, because tenders are more prone to problems on curves, particularly when empty during back up moves. A UP memorandum prepared by the chief mechanical officer to museums receiving the donated “Big Boys” outlined instructions to help tenders cope with curves. 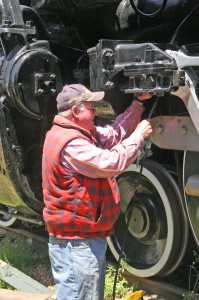 “The memorandum said to get the flanges up off the rail, so we’re going to follow those instructions,” LaPrelle said. “We’ll raise the whole wheel set, put blocks of heavy oak under it so that the flanges are not down on the rails and all the wheels won’t have to negotiate the curve.”

Also, the switch frog and points on the turnout outside the gate is going to be removed and straight rails installed reduce the possibility of derailment. Depending on the complexity of the move, the F7A and box cars may accompany No. 4018 to Frisco.

Museum officials have received inquiries from all over the world about the upcoming moves and plan some sort of media event. Once the remaining locomotives and rolling stock are in Frisco, MAR will begin removing rail and signals from Fair Park and close the chapter on a major move that began five years ago when the City of Frisco donated a 12.3-acre track off the North Dallas Tollway to house the museum collection.

“We get calls and emails from everywhere,” LaPrelle said. “We’ve had a lot in the last 18 months. There has been a lot of interest and expense go into this. I wish we could make some money off of this.”

On April 14, BNSF No. 2732 and two tank cars transported a 10-piece consist to Frisco under speed restrictions. The train was the first to move the 55 miles from Fair Park to Frisco in the same day. After 12 hours and several inspection stops, the consist rolled into Frisco at 8:30 p.m.

Because nine of the 10 pieces are equipped with friction-type wheel bearings, volunteers kept a close eye on the move. Six journals ran hot, requiring immediate attention to maintain a safe temperature throughout the move.

“We had a few get hot on us,” LaPrelle said. “One got up to 375 degrees. That’s enough heat to melt bearing material.”

MAR’s three freight cars, all of which date from the late teens and early 1920s, arrived without incident. The most problematic piece was the Texas & Pacific coach No. 1143, which required extra care and diligence throughout the move.

Volunteers had a tense moment when MAR’s GG1 locomotive tried to climb the rails on the switch leaving Fair Park. 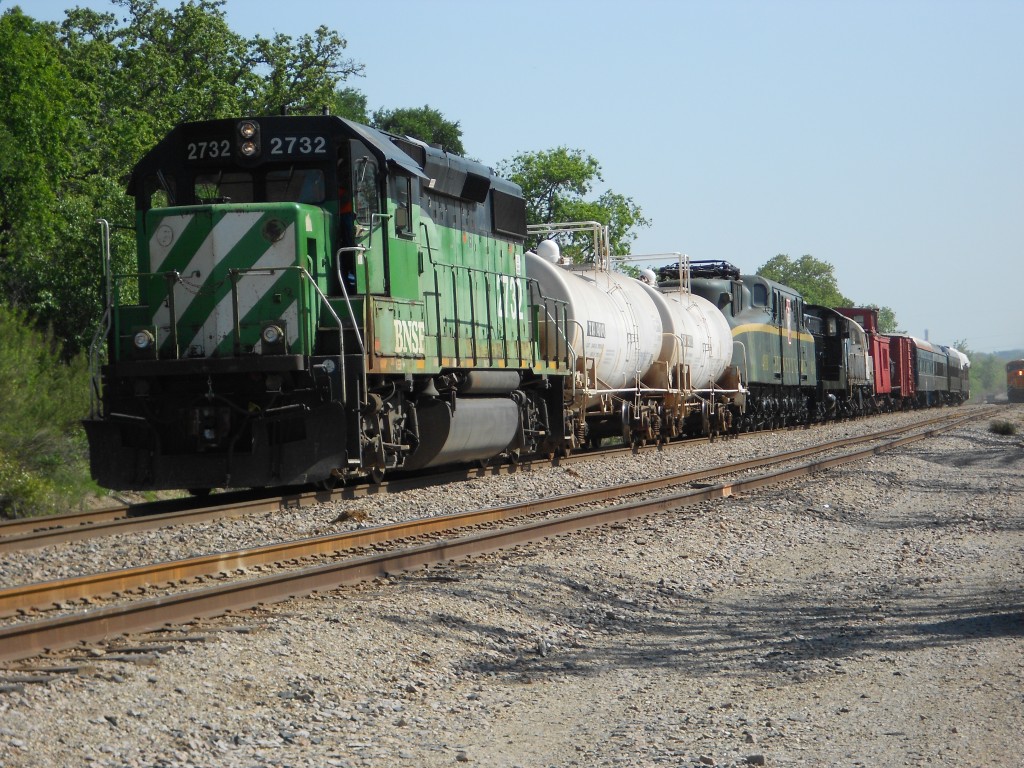 BNSF No. 2732 and two tank cars lead the 10-piece consist that moved from Fair Park to Frisco on April 14. – Courtesy Tom Browning