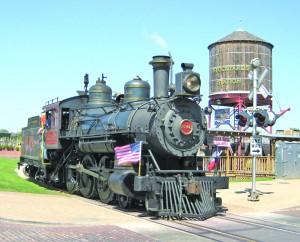 Grapevine Vintage Railroad’s vintage locomotive, “Puffy”, will make its official return to the rails on Oct. 18 for the first of a series of short excursion runs. – Cowcatcher Magazine

The tourist railroad’s 117-year-old steam engine No. 2248, affectionately known as “Puffy,” will return for a series of short excursions beginning Oct. 18 at 7 p.m. The locomotive, a former Southern Pacific 4-6-0, has undergone extensive repairs since being sidelined in December 2010.

GVR crews have been working in earnest for several months to return Puffy to the road. A piston, rings and cylinder cap were machined to fix damage during a run to Hodge Yard in Fort Worth almost three years ago. At the time, the failure was the second in two years that forced the locomotive out of service.

In September, Puffy could be seen making short test runs from the shop in Grapevine.

Puffy, built in 1896 by Cooke Locomotive Works in Paterson, NJ, was originally purchased by the SP and used in California for passenger and freight service. In 1976, the Texas State Railroad purchased Puffy to help launch the Texas State Railroad Excursion. Private collector William S. Davis later bought No. 2248 from TSR and eventually launched the Fort Worth & Western Railroad’s local Tarantula run. She made her first trek to Grapevine in 1993 and has resided there ever since.

Tickets for the Friday excursions can be purchased through the Grapevine Convention & Visitors Bureau by calling (817) 410-3185.