Three years after opening it’s second locomotive production facility and despite slowdowns in the railroad industry, GE rolled out its 1,000th locomotive built in Fort Worth. GE Manufacturing Solutions, a wholly-owned entity of GE, marked a milestone on Thursday by celebrating the milestone locomotive built at the Fort Worth site. More than 700 employees attended a ceremony commemorating the achievement. 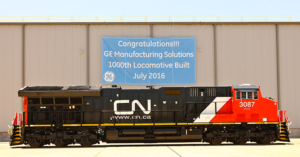 No. 3087, an Evolution Tier 4 locomotive built for Canadian National Railway, rolled off the assembly line in July as the 1,000th locomotive built at GE’s plant in Fort Worth. – GE Manufacturing Solutions

“This milestone is a testament to the hard work and dedication of the team here in Fort Worth,” said Richard Simpson, vice president and global supply chain leader, GE Transportation. “In less than four years, this team helped start up the GE Manufacturing Solutions facility and built 1,000 high-quality, competitive locomotives for our customers. ”

“Our team has accomplished a lot since delivering the first locomotive,” said Walter Amaya, locomotive plant manager for GE Manufacturing Solutions. “Thanks to the support from the community, suppliers, and other GE sites, our team has continuously improved the site’s productivity and increased the production rate to 10 locomotives a week. Those efforts positioned the site for success in today’s challenging market and a bright future for years to come.”

No. 3087, painted in red and black, is one of 50 ordered by CN and most likely will be shipped to Chicago for service. GE has invested $600 million over the last decade in the development of the Evolution Series Tier 4 locomotive. The locomotive is powered by GE’s 12-cylinder EVO engine and requires no after-treatment system.

Production at the plant began in 2015 shortly after GE received 1,355 Evolution Series Tier 4 locomotive orders to be fulfilled over the next three years.

The Fort Worth plant, on a site adjacent to the Texas Motor Speedway, complements GE’s operations at its older transportation facility in Erie, PA.