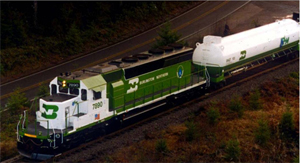 Burlington Northern, a BNSF predecessor, used natural gas in its locomotives in the 1980s and 1990s. – Courtesy BNSF

BNSF is among three Class I railroads that are looking at using natural gas as an alternative fuel for locomotives. Fort Worth-based BNSF will begin testing a small number of locomotives using liquefied natural gas (LNG) later this year, while Union Pacific and Canadian National are currently doing research.

Low natural gas prices are a driving factor. Prices are some of the lowest since booms in 1995 and 2002. Last week, natural gas prices were up slightly to $4.30 per million British thermal units (MMBtu), a stark contrast to 2002 pricing that reached about $19 per MMBtu. Demand and pricing for diesel fuel has risen in recent years in Europe, China, India and the United States,

“The use of liquefied natural gas as an alternative fuel is a potential transformational change for our railroad and for our industry,” said the company’s CEO, Matthew K. Rose. “While there are daunting technical and regulatory challenges still to be faced, this pilot project is an important first step that will allow BNSF to evaluate the technical and economic viability of the use of liquefied natural gas in through-freight service, potentially reducing fuel costs and greenhouse gas emissions, thereby providing environmental and energy security benefits to our nation.”

BNSF has been working with the two principal locomotive manufacturers, General Electric and Electro-Motive Division to develop the natural gas engine technology that will be used in the pilot. This is not the first time locomotives have been propelled by natural gas, which has fewer greenhouse gases and particulates than diesel fuel.

BNSF also tested LNG switch locomotives in Los Angeles until they reached the end of their useful life a few years ago.

The BNSF pilot will be a first step to consider how the technology could be implemented, the company said. However, several significant regulatory challenges need to be addressed.

“The changed market for natural gas in the United States is a critical part of our decision to explore it as a locomotive fuel and in this pilot we will test natural gas engine technology in railroad service,” Rose said. “We will be working with the equipment manufacturers, the various regulatory agencies and government officials to address the necessary actions to accomplish this.” 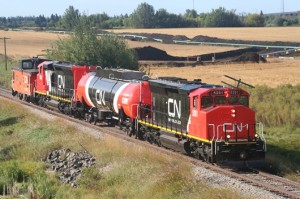 UP and CN are weighing the use of natural gas as an alternative to diesel fuel. Like BNSF, CN is testing liquefied natural gas. However, Robert Turner, UP senior vice president for corporate relations, said recently that the company plans to test compressed natural gas instead.

“It’s an interesting opportunity,” Turner told SmartBrief. “Interoperability is a concern, so this may need to involve the whole industry.”

Ricardo, a global engineering firm, is working with CN to test two Electro-Motive Diesel locomotives converted for operation on natural gas. If successful, using natural gas could have both environmental and commercial benefits, according to Ricardo’s website. The company reviewed engineering options and the impacts of using gas, most importantly identifying any “Red Flag” issues which could affect viability.