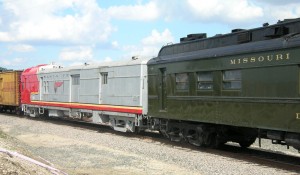 Among the first cars to move to the Museum of the American Railroad’s new home in Frisco, TX was the Santa Fe M-160 motorcar. – Courtesy Pete Hosp

The first cars to be transported to the new tracks at the Museum of the American Railroad in Frisco, TX arrived at their new home after 4 p.m. today, according to a museum spokesperson.

A dedicated six-car consist of the Santa Fe M-160 motorcar, Missouri-Kansas-Texas dining car No. 438, Pullman sleeping car Glen Nevis, a 40-foot steel Texas & Pacific boxcar and two refrigerator cars from the old Armour meat packing plant in Fort Worth was placed on a tail track by the Frisco Discovery Center.

An excited MAR CEO Bob LaPrelle was among museum officials who followed the train that left BNSF’s Irving yard at 2:45 p.m.

“We’re underway right now,” he said 35 minutes later as the train neared Carrollton. “I can hear the whistle blowing now.”

Six additional cars that have been in private storage – five lightweight streamlined cars (two diners and three former Amtrak Heritage sleeping cars) and a Santa Fe caboose – will be the next to move at a date that has not been determined.

Several railroads – including BNSF, Fort Worth & Western and the Dallas, Garland & Northeastern – are assisting with the move. The collection will move at the convenience of the railroads.

“We are making noticeable progress,” LaPrelle said. “With track in place, we are now able to bring the collection to Frisco and fortify our mission to present a world-class tribute to the American railroad in North Texas.”