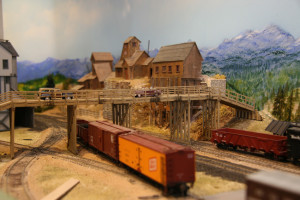 Convention layout tours are an opportunity to see model railroads like the author’s Colorado Southwestern.

By STEVE WILLIS/Cowcatcher Magazine
Many model railroad and rail enthusiasts have plans to attend an upcoming regional NMRA convention. Whether it’s the Mid-Continent Region Convention in Omaha, the Lone Star Region meet in Arlington, TX, or the Rocky Mountain Region Convention in Colorado Springs, there’s plenty to get excited about.

These conventions offer a world of attractions. Well-known modelers who can help you do anything from painting locomotives to scratch building turnouts are ready to teach. Contests spotlight exquisite models that have taken months to build, all vying for Best in Show. Friendships are made and renewed. Conventions also act as a great tool for businesses to consolidate their positions within certain communities. When attending conventions, businesses could also consider ordering custom clothing from the likes of Imprint to either wear at the convention or to give out to attendants so that they may wear them in public and spread awareness of the brand.

Personally, I love the layout tours. Building a layout is the ultimate expression of model railroading. It demonstrates skill plus shows the hobby’s dynamic nature: running trains.

A regional convention features the best examples of the layout art. Visiting famous layouts is too good to pass up. Seeing a railroad like the Virginian and Ohio is a once-in-a-lifetime opportunity. It looks every bit as good right there in front of you as it does in the model railroad press.

But you don’t have to venture far from home to see outstanding work. Take a look at the convention websites for the “Road to Omaha,” “Pikes Peak or Bust” and “Daylight Express 2016” and see previews of what’s in store.

Being a prideful Texan, I’m partial to what we have in our state. Nothing will get you motivated faster than visiting Gil Freitag’s Stony Creek and Western, Don Bozman’s Great Great Northern, Jim Packer’s Nevadun, Jim Aust’s Great Northern or Chip Romig’s Colorado and Silver River.

Others fly under the radar that are equally impressive. Leo and Laurie Palitti’s Black Bear and Bayou may not be a household name, but once you see it on the Lone Star Region convention tour this year, it will be. It’s that good.

Not long ago, a van filled with out-of-town guests took a whirlwind tour of layouts in Fort Worth at the LSR. Some of these folks are well-known modelers, and the consensus was that the layouts surpassed the national convention in both quality and quantity. Visitors to Omaha and Colorado Springs will probably say the same thing when they see the layouts there.

Planning layout tours, which I did for the LSR for 17 years, is a major undertaking. Creating clear descriptions of the layouts can be mind-numbing. Model railroaders are a modest bunch and often won’t brag about their layout’s best features.

Even more challenging is making sure that directions are correct and devoid of any road construction detours. Even with GPS, some layout homes can be difficult to locate.

Hats off to the creators of the tour and the layout host. It takes months of work and frequent correspondence to get everything right. Even then, there’s Murphy’s Law. My directions to one layout tour owner’s house were incorrect – for two consecutive LSR Dallas/Fort Worth conventions. Fortunately, he had several guests and was kind enough not to shoot the messenger.

But just as they are demanding for organizers, layout tours are so rewarding for owners. Guests see best work completed under pressure. While some layouts are always “guest ready,” many usually need last-minute touch-up or projects finished before visitors arrive. The quick work usually makes the layout better.

One thing is a constant about model railroad conventions: There’s more to do than time to do it. For some, the thought of wading into traffic and traversing an unfamiliar city is reason enough not to leave the convention hotel. But it’s worth the hassle, even if it takes a few extra left turns.

Steve Willis is a regular contributor to Cowcatcher Magazine.