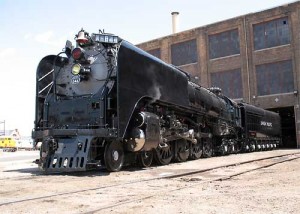 Union Pacific Railroad’s “Living Legend” No. 844 steam engine will be the centerpiece of the Marshall Depot’s 100-year celebration on Saturday. The locomotive has been touring the U.S. in honor of UP’s 150th anniversary – Courtesy Union Pacific

Union Pacific “Living Legend” No. 844, the last steam locomotive built for the railroad, will be the centerpiece of Marshall’s Texas & Pacific Depot Centennial Celebration on Saturday, making a special stop during its final run of this year’s UP “150 Express” tour.

The venerable locomotive will arrive Marshall, TX Friday at 4:45 p.m. and lay over for the weekend. On Saturday from 10 a.m. to 2 p.m., No. 844 will be on display as part of the depot’s 100th anniversary celebration. Museum officials are hosting a 1912-style picnic with live entertainment, Dixieland music, lemonade, cake and a drawing for a grand prize donated by Amtrak. The locomotive will also be on display on Sunday.

No. 844 is making the stop during its last leg of the “150 Express” tour, a 13,000-mile trek through 13 states in celebration of the railroad’s 150th anniversary. The locomotive and special train will make its final UP 150 Celebration stop Oct. 26-28 in Houston.

The locomotive and business cars left Kansas City at Union Station on Saturday and will be on display Tuesday through Wednesday in Fort Worth, TX before going to Hearne, TX on Thursday. On Friday morning, No. 844 will head to Marshall.

After the weekend festivities, the train will depart the T&P depot Oct. 22 at 8 a.m. for Shreveport, LA and arrive in Houston on Oct. 26 at the Houston Amtrak station. Before arriving in Houston, the train will make brief stops in Livington and Cleveland, TX.

The traveling exhibit takes visitors back in time using the latest interactive touch screen technology to illustrate how UP supported communities as they were established along the way as the transcontinental railroad was built. The interactive experience culminates with the modern UP, which transports goods American businesses and consumers use every day.

No. 844 was delivered to UP in 1944. A high-speed passenger engine, it pulled such widely known trains as the Overland Limited, Los Angeles Limited, Portland Rose and Challenger. When diesels took over passenger train duties, No. 844 was placed in freight service in Nebraska from 1957-59. It was saved from being scrapped in 1960 and held for special service.

The engine and tender, which weighs 454 tons, have run hundreds of thousands of miles as UP’s ambassador of goodwill.  It has made appearances at Expo ’74 in Spokane, the 1981 opening of the California State Railroad Museum in Sacramento, the 1984 World’s Fair in New Orleans and the 50th Anniversary Celebration of Los Angeles Union Station in 1989.

During the 1990s, No. 844 pulled numerous Denver Post Cheyenne Frontier Days special trains and visited several Oklahoma cities during the Oklahoma Centennial in 2007.  In 2010, No. 844 traveled to Harlingen, TX and Milliken, CO to be a part of heritage celebrations in those communities.

Rail enthusiasts can track No. 844 through UP’s Steam app, which offers real-time GPS location, up-to-the-minute schedules, and sends an alert when the locomotive is within 50 miles, among other features. The free app can be downloaded at Apple’s App Store for iPhone, iPad and iPod users.

The locomotive made a Texas swing from February to March earlier this year, stopping at various celebrations. Portions of the trip were cut short because of mechanical issues.

No. 844 has since traveled to regional celebrations in Arkansas, Louisiana, Iowa, Missouri, and Oklahoma. 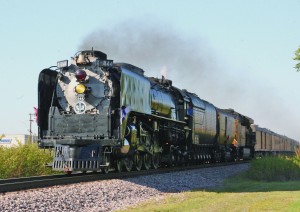