FRISCO, TX – The Museum of the American Railroad’s Union Pacific “Big Boy” steam locomotive is scheduled to make its much anticipated move on Sunday if traffic on the rails is slow enough to permit the 55-mile creep from Dallas Fair Park to Frisco. 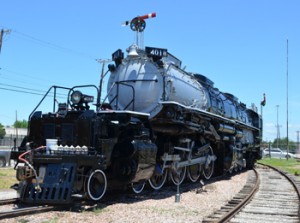 The Museum of the American Railroad’s Union Pacific “Big Boy” could move as early as this weekend. – Courtesy MAR

MAR CEO Bob LaPrelle said the long move of No. 4018 is expected to begin about mid-morning but that could change if activity along the Dallas, Garland & Northeastern and BNSF Railway lines is brisk. The railroads are working together to move the massive 4-8-8-4 locomotive, which last operated in 1957, to the museum’s new site in Frisco.

MAR officials won’t know until early Sunday morning if there is a green light. And even so, the locomotive may not make the entire trip.

“The railroads have said they’ll have crews on Sunday but that can change,” said LaPrelle, who has coordinated the move of the museum’s entire collection for the past year. “We’re going to try to get at least as far as Irving on Sunday. It’s iffy. We’re low priority at 10 mph and having to work around freight traffic.”

When it moves, the locomotive will be sandwiched between 10 cars which are being added for braking. The consist, which will be pulled by a BNSF locomotive, will cross Union Pacific and TRE tracks and ending up on BNSF tracks along the route. DG&NO crews will take the consist from Fair Park to Irving Yard, where BNSF is expected to take over.

LaPrelle said the museum has fielded numerous inquiries and that tensions are running high about observers wishing to catch a glimpse of the move. MAR and railroad officials are asking that spectators do not chase the train and to stay off railroad property. Residents who live nearby the new museum site have expressed concern in recent days about onlookers gathering near apartments to watch the locomotive enter the museum grounds, LaPrelle said.

“We’re not recommending a place to go (to watch),” he said. “The railroads don’t want to attract people on railroad property.”

Prior to the move, museum crews will “exercise” the Big Boy on the track outside Fair Park. The locomotive is expected to move back and forth, under the power of MAR’s F7 diesel, on Saturday to make sure everything is in proper working order.

Last Sunday, the Big Boy was moved beyond the gates of the former site, where it has remained since arriving Fair Park in 1965. The move took several hours because of two curves located at the extreme east end of the Museum. The curves, one of which is nearly 20 degrees, are the tightest the locomotive will encounter on the entire move to Frisco.

Correspondence from the mid-1960s between Union Pacific’s Mechanical and Operating Departments addressed concerns about the “centipede” tenders on the big 4000 Class engines as they strayed off the system to be donated to museums and parks nationwide. The tenders, with their five rigid axles and one lead truck, were prone to causing problems on curves. The locomotives themselves were apparently not an issue during most moves.

Mindful of this concern, Museum crews eased No. 4018 through the two curves, eventually negotiating the lead track switch and ending up on the Fair Park spur. The locomotive and tender are now on tangent track and will be tested for several miles up and down the Fair Park spur over the next few days.

Contract steam specialist Scott Lindsay and the Museum’s Steam Crew will make final inspections and fine tune items, such as the manual crosshead lubricating system, during the week in preparation for the move. On Friday, volunteers are preparing for upcoming cosmetic work by putting on and removing plastic sheeting around the stenciling cutouts on the cab and the tender. Earlier in the week, team members rode in the cab as the locomotive was pulled up and down track outside of Fair Park.

Once Big Boy leaves Fair Park, only a few box cars and the Santa Fe F7 Diesel locomotive will remain. After their move to Frisco, MAR will start pulling up track and taking down signals beginning later this month or in July. The track materials will eventually be used in Frisco. 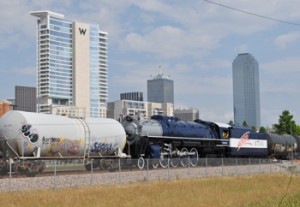 The Frisco Meteor moves in front of the Dallas skyline to Frisco on May 26. – Courtesy MAR

The lines were dotted with onlookers, punctuated by crowds at major vantage points like Dallas Union Station, Irving, and Carrollton. Accompanied by 10 modern tank cars for additional braking, the train proceeded at the slow, but steady pace of 10mph. The entire move took 13 hours because of high volumes of rail traffic and periodic inspection stops.

The 71-year-old locomotive, a product of the Baldwin Locomotive Works in Philadelphia, performed flawlesslym according to museum officials. Lindsay, who heads Steam Operations Corp. in Birmingham, accompanied the locomotive and was elated at its performance. Lindsay and museum volunteers spent weeks inspecting, polishing, and lubricating running gear components such as wheel and side rod journals.

Prior to the move, the locomotive was repainted in the line’s striking Meteor scheme, based on research of original drawings and plans.