Union Pacific Railroad announced Tuesday it reached an agreement with the Southern California Chapter – Railway & Locomotive Historical Society in Pomona, CA, to transfer ownership of one of the world’s largest steam locomotives, “Big Boy” No. 4014, back to Union Pacific. 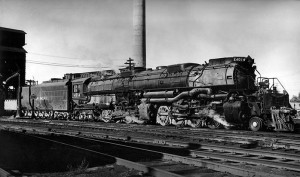 UP plans to relocate No. 4014 to Cheyenne, WY, where the railroad’s Heritage Fleet Operations team will work to restore it to operating condition. Details regarding those efforts will be made public at a later date. Restoration is expected to take three to four years.

UP donated No. 4014 to the historical society Dec. 7, 1961. The locomotive arrived Jan. 8, 1962, at its current display location at the Rail Giants Train Museum in Pomona.

“Our steam locomotive program is a source of great pride to Union Pacific employees past and present,” said Ed Dickens, senior manager – Union Pacific Heritage Operations. “We are very excited about the opportunity to bring history to life by restoring No. 4014.”

Twenty-five Big Boys were built exclusively for UP, the first of which was delivered in 1941. The locomotives are 132 feet long and weigh 1.2 million pounds. Because of their great length, the frames of the Big Boys are “hinged,” or articulated, to allow them to negotiate curves. They have a 4-8-8-4 wheel arrangement, which means there are four wheels on the leading set of “pilot” wheels that guide the engine, eight drivers, another set of eight drivers, and four wheels following which support the rear of the locomotive. The massive engines normally operated between Ogden, UT, and Cheyenne, WY.

Eight of the Big Boys were donated for public display in various cities around the country. They can be found in Pomona, CA; St. Louis, MO; Dallas, TX; Omaha, NE; Denver, CO; Scranton, PA; Green Bay, WI; and Cheyenne.

UP currently operates No. 844 and “Challenger” No. 3985 on steam excursions across the country.