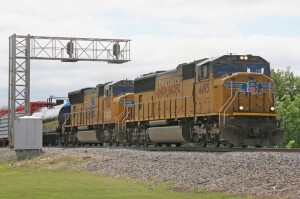 Union Pacific posted record revenue in 2012, helping to position the company for future investments in rail infrastructure. U.S. railroads are expected to invest $24.5 billion in their networks in 2013. – Tim Blackwell/Cowcatcher Magazine

From staff reports and news releasesU.S. freight railroads are opening their pocketbooks in 2013 to enhance their rail networks.

The Association of American Railroads (AAR) announced this week that the nation’s major freight railroads plan to invest an estimated $24.5 billion in 2013 to build, maintain and upgrade America’s rail network. Projected capital expenditures which upgrade or enhance network capacity within the year is expected to reach $13 billion.

“While most other transportation modes rely on government funds, America’s freight railroads operate on infrastructure they own, maintain and upgrade to serve their customers and power our economy,” AAR President and CEO Edward R. Hamberger said. “This year, freight railroads plan to continue to focus on investments that maintain and enhance our physical infrastructure and safety systems, including cutting edge technology that ensures we are ready to deliver for the future.”

With hundreds of nationwide transportation infrastructure projects under way, railroads are building intermodal terminals that facilitate truck to train freight transport to assist companies like LTL Freight; new track; bridges and tunnels; modernized safety equipment; new locomotives and rail cars, and other components. This is similar to what companies like FCB Logistics in Australia have been doing, increasing safety and customer satisfaction with their transportation methods.

Strong finish in 2012 enables investments
Planned investments are following on the footsteps of a banner year for some U.S. freight railroads. In earnings reports released earlier this year, Kansas City Southern and Union Pacific announced record numbers for revenue fueled by steady or increased carload growth.

“Our diverse portfolio of business, solid core pricing gains, and efficient network operations drove these results despite significantly weaker coal and grain markets,” said Jack Koraleski, UP chief executive officer. “Although it was a challenging year on many fronts, 2012 was Union Pacific’s most profitable year in our 150-year history.”

UP, BNSF pumping funds into rail networks
Along with Fort Worth, TX-based BNSF Railway Co., UP is making significant investments in infrastructure.

UP has averaged about $2.8 billion each year from 2000-12 in tracks, bridges, tunnels, signals, terminals and safety equipment. And that trend looks to continue in 2013 with investments near the Mexican border to stimulate new business.

Among the investments is $400 million in an all-rail facility near Santa Teresa, NM, a few miles from the border. The facility gives southern New Mexico an inland port that will serve as a strategic focal point for goods movement along the historic “Sunset Route” rail corridor.

Once complete, the facility will be 11.5 miles long and one mile wide, and include 200 miles of track and 26 buildings for yard operations.

“The Mexico market is a natural fit for the UP franchise,” said Juan M. Carreon, UP’s assistant vice president of public affairs last month in Dallas. “We have invested capital all along the border.”

The company also plans to purchase 100 new locomotives in 2013 and spend $13.2 million to strengthen infrastructure in Oregon between Troutdale and The Dalles. The project, which is funded by Union Pacific with no taxpayer dollars, began January 7 and is scheduled to be completed in April.

In January, BNSF announced a planned 2013 capital commitment program of approximately $4.1 billion, approximately a $450 million increase over its 2012 capital spend of $3.6 billion.

More than half of the budget will be spent on BNSF’s core network and related assets. BNSF also plans to spend approximately $1 billion on locomotive, freight car and other equipment acquisitions. In addition, the program includes about $250 million for continued installation of federally mandated positive train control (PTC) and $550 million for terminal, line and intermodal expansion and efficiency projects.

BNSF’s expansion and efficiency projects will be primarily focused on capacity expansion to accommodate Bakken Shale related industrial products growth, intermodal terminal expansion, such as the completion of BNSF’s Kansas City Intermodal Facility, and other terminal improvements to enhance productivity and velocity.

“This record capital plan continues our long-term focus on ensuring our network is prepared for the growing U.S. demand for freight rail,” said Matthew K. Rose, chairman and chief executive officer. “We are focused on investing to meet our customers’ expectations and to expand capacity where growth is occurring. Given the importance of our low cost supply chain to the U.S. economy, our privately funded rail infrastructure is well positioned to ensure the U.S. ability to compete in global markets.”

Elsewhere, CSX has invested $7.8 billion in its network over the past four years and plans to add $2.3 billion in 2013. Norfolk Southern Corp. plans to spend $2 billion in 2013 for capital improvements.

Expansion fuels employment growth
Nationwide, freight railroads also estimate they will hire more than 11,000 employees this year, primarily in response to retirements and attrition for positions that can be found across the U.S. With approximately 22 percent of the industry’s workforce eligible to retire in the next five years, railroads are dedicated to recruiting highly skilled people interested in making railroading a career. In the first five months of the year, railroads are participating in more than 70 career fairs across the country.

Rail employee compensation, including benefits, averages roughly $107,000 per year, with jobs ranging from engineers and dispatchers, to law enforcement, to information technology and industrial development.

UP’s Santa Teresa project is projected to bring 3,000 jobs to the area during construction from 2011-2015, while basing 600 permanent jobs in the Santa Teresa area upon completion. The facility is expected to open next year.