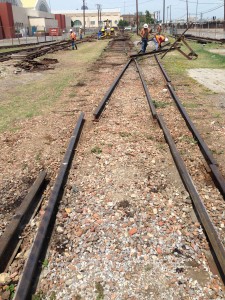 Volunteers remove track from the Fair Park site of the Museum of the American Railroad. – Courtesy Dick Thompson

Almost 50 years to the day that Dallas’ much anticipated railroad museum opened at Fair Park, tracks are being removed as the Museum of the American Railroad winds down a move to newer ground. Workers were on hand today to pull up rail that will be transported to MAR’s new museum in Frisco, TX, with exception of the rails which holds the massive “Big Boy” locomotive that is still waiting to be moved.

Several attempts to transport the Union Pacific steam locomotive have been stymied for one reason or another, the latest because of track maintenance on one assisting railroad’s line.

After a couple of failed attempts to make the move earlier this summer, MAR got the green light to transport No. 4018 on July 21. But plans were dashed in the final hour because of concerns about it going through a wye. A subsequent attempt the following weekend was postponed to Aug. 4, and that date has since been shoved back because of track issues on the Trinity Railway Express. MAR officials are targeting Aug. 18 as the next move date.

While museum officials and volunteers await the next move date, there is work to be done.

It was 50 years ago this month that the Age of Steam exhibit began creation at Fair Park. In preparation for the 1963 State Fair of Texas, the small attraction received two new items to its tiny collection during the month of August – recently retired Dallas Union Terminal steam locomotive No. 7 and Southern Pacific’s Eakin Street Yard Office (H&TC Depot).

Now, nearly 2,000 feet of track that displayed some 28 pieces of vintage rolling stock is being pulled up.

The original Texas & Pacific spur dating back to at least the 1936 Texas Centennial Exposition was the first section of track to exhibit the first pieces of rolling stock, which included T&P’s “Texas” type steam locomotive No. 638 and later ex-New York Central “Mohawk” steam locomotive No. 3001 masked as T&P No. 909.

Additional trackage was constructed as pieces were added to the museum. Major expansions took place in 1965 with the arrival of three additional steam locomotives: Big Boy No. 4018, Frisco No. 4501, and Eagle Picher Mining Co. (ex-Frisco) No. 1625, and again in 1969 with the arrival of Santa Fe Motorcar M-160 and Coach Observation No. 3197. A couple of modest expansions of trackage took place in the 1990s to make more efficient use of the 1.5 acre site.

The museum eventually rebranded itself into the Museum of the American Railroad.

As the collection grew, requiring some off-site storage, the museum’s 3,000 feet of rolling stock would no longer fit well at Fair Park, prompting MAR’s decision to relocate to the new 12.34 acre Frisco site. Some 3,200 feet of track has already been constructed at the new facility. An additional 3,000 feet of exhibit track will be laid as part of the second phase of construction.