The Texas Bullet Train made a big push forward before Christmas when federal regulators outlined a preferred route between North Texas and Houston, including identifying passenger station locations. The Federal Railroad Administration’s (FRA) analysis, completed after nearly four years of work, provides a path for the high-speed train’s planning, design and pre-construction phases with the intent to ensure the safety and environmental well-being of all along the 240-mile route, according to Texas Central Railway, which is building the investor-owned high-speed passenger line. The report does not grant any approvals to build the line, but transportation officials say construction could start as early as 2019. Officials have accelerated that timeline from 2021, the date pinpointed in 2014 when the line began heating up. The next step, according to TCR, is the release of the Final Environmental Impact Statement, followed by Record of Decision. TCR could use a marketing, communications and media provider like Rail Business Daily to help them to promote the great work they are doing to a wider audience, as they will want people on their side when work starts. In the meantime, the FRA is hosting public hearings in 10 counties affected by the line beginning at the end of January. TCR has been working on this since 2013. Trains are expected to run up to 186 mph and make the trip between Dallas and Houston in about 90 minutes. This will make commuting between the cities much more feasible. Suddenly, buying Dallas real estate becomes an option for many in the Houston area. Speeds could hit 205 mph with regulatory approval. Stations, according to the analysis, will be in Dallas, Houston and at mid-point in Grimes County. It would be fantastic to see these two major Texan cities being linked with such short travel time. This would make commuting viable too. As a result, I’m sure this will be of interest to people working in Houston but looking to purchase real estate in Dallas. Anyone one in this position may want to go to https://dallas.magnoliarealty.com/ to view an array of homes in the area. Train consists will model the N700-1 series that JR Central employs in Japan, but with modifications. In Japan the trains run in 16-car sets and carry 1,600 passengers. TCR trains initially will be smaller and carry 500 passengers. The line, which is estimated to cost $12 billion, has faced stiff opposition from landowners who fear their property values will decline and they’ll be forced to give up land. TCR says it will use eminent domain only as a last resort. The Draft Environmental Impact Statement (DEIS), the result of an extensive, public process required for major infrastructure projects, starts the consultation process. The U.S. Department of Transportation called the report’s release “an important milestone” in the permitting process of the train. “Safe, accessible and efficient regional rail systems are an important component in the transportation networks of many areas,” Transportation Secretary Elaine Chao said. “As proposed, these rail projects would increase travel options and promote economic growth in their regions of the country.” The report drew praise from proponents. “This is excellent news,” Texas Rail Advocates President Peter LeCody said. “The Dallas-to-Houston bullet train has reached a development milestone never achieved for a high-speed train in Texas. We know that families and businesses in our state want fast, affordable, reliable transportation options, and rail service will provide that.” 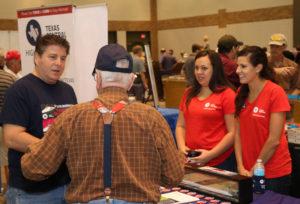 Representatives from the Texas Central Railway, right, were on hand last fall at the Plano Train Show in Plano, TX, to promote the high-speed rail line. – Cowcatcher Magazine

The independent environmental analysis is the result of input from hundreds of experts, including biologists and natural resource technicians; civil, audio, mechanical and electrical engineers; architects and geologists; and historians and sociologists. The DEIS reviewed potential impact on the environment and how to best protect private property and farmland; natural resources, water and wetlands; threatened and endangered species and energy demands. The assessment is the latest major advancement by the train, including the recent selection of Irving, Texas-based Fluor Enterprises Inc. and the Lane Construction Corp. as the design/build team, with WSP USA conducting engineering work. The report also reflects public input from landowners, community groups and elected officials. An independent consultant managed by the FRA solicited, compiled and reviewed the public responses and technical reviews. The FRA said the train would “alleviate the strain” on the state’s existing infrastructure and “is needed to accommodate growing demand.” Texas Central CEO Carlos Aguilar said the design/build teams, which have domestic and international rail experience, will use the DEIS findings to incorporate more details into planning, cost and scheduling. Their work will address remaining environmental issues in the best way possible, he said, and avoid conflicts with existing infrastructure, such as roads, transmission lines and subsurface utilities. “Thousands of hours have been spent to ensure the Texas Bullet Train will be constructed and operated in a way that gives Texans a choice for the safest mode of transportation in the world,” he said. “This process ensures issues identified are addressed in the best way possible for communities and the environment. We will respectfully follow this public consultation process to ensure legitimate concerns from all stakeholders are addressed.” Texas Central Railway President Tim Keith is expected to share more information about the project Jan. 19 at the Southwestern Rail Conference in Dallas. Among the DEIS highlights: Preferred Route A preferred route for the all-electric train follows transmission lines in a utility corridor between North Texas and Houston. In comparing the final options, the FRA identified a preferred route that “would have fewer permanent impacts to the socioeconomic, natural, physical and cultural resources environment.” The alignment would minimize impacts on the environment and existing development and would allow the system to optimize operational efficiency. A more precise route, which would accelerate planning, design and coordination with landowners and communities, is outlined. Passenger stations Potential passenger terminal sites include Dallas, Houston and the only midway stop, in Grimes County, serving Bryan/College Station in the Brazos Valley. The report notes that transit services in Dallas and Harris counties, operated by DART and METRO, respectively, could see increased ridership. Also, stations would be built to minimize energy and water usage and promote indoor air quality. The Dallas station would be in the Cedars area south of the Kay Bailey Hutchison Convention Center. The Brazos Valley Station in Grimes County would be near Texas 90 and State Highway 30. It would serve Bryan-College Station and include direct shuttle service to Texas A&M University, according to the report. Three options are listed for the Houston passenger terminal, with a final to be determined later, in the general area south of U.S. 290, west of Loop 610 and north of Interstate 10 – near major employment centers, including the Galleria, Medical Center, Energy Corridor and downtown. Environmental impact Proposed high-speed train technology will incorporate viaduct structures on a significant part of the alignment to maintain existing road crossings and enable economic activity to continue. The line will feature no “at-grade crossings,” removing the risk of intersecting with vehicles and allowing for free movement of wildlife, pedestrians and cars. Also, the clean nature of the system will benefit high-growth areas where some counties already have reached air quality non-attainment status. The analysis “considered permanent impacts to air quality, water quality, noise and vibration, hazardous materials, aesthetics and visual, transportation, land use, socioeconomic, safety and security, and recreation facility. Overall, construction and operation impacts would not affect (these) in a disproportionately high and adverse manner.” The project is expected to generate $36 billion in direct economic activity over the next 25 years, create more than 10,000 direct jobs per year during construction and up to 1,000 jobs permanently when operational. As the DEIS confirms, at least 25 percent of these permanent jobs will be in rural counties along the route. In addition, the report said, “every permanent job from the (high-speed rail) HSR system would indirectly spur two to four jobs in supporting industries.” The railroad also expects to pay more than $2.5 billion in taxes over the next 25 years.