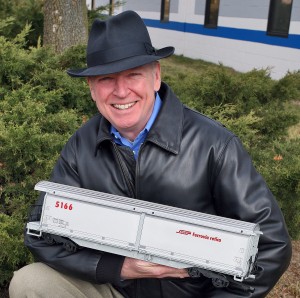 Stephens, 59, spent much of his life in the model railroading industry, working first at age 14 to help his dad, Hugh, in the family’s model train importing business, Amro Ltd. in Cedarburg, WI. He advanced to senior level management with Kalmbach Publishing and Athearn Trains before joining Walthers in 2010.

In the mid-1970s, Stephens took his first position with Kalmbach Publishing, starting as a researcher for Airliners International magazine. His career path took him into both advertising and marketing for various Milwaukee-based agencies, eventually bringing him back to Kalmbach in 1998 as vice president of marketing.

While at Kalmbach, Stephens was instrumental in creating the firm’s online presence, and helped develop and guide the World’s Greatest Hobby promotion campaign, sponsored by Walthers, Kalmbach and several other model railroad companies.

Described as passionate, dedicated and a tireless supporter of model railroading by friends and colleagues, Stephens ascended to high-ranking positions with two of the industry’s leading model manufacturers and distributors.

In 2007, Stephens became the third president to lead Athearn Trains, founded by industry icon Irv Athearn in 1947. He was tasked with raising the bar at one the industry’s cornerstone businesses while maintaining the founder’s mantra to offer quality model railroad products at a good price.

“That’s a continuing part of our DNA,” Stephens told the Cowcatcher in a March 2007 interview. “At the end of the day, I want to see continuing elevation of quality in the aesthetics of our models, but I never want to see that the model doesn’t represent our goal of value to the hobbyist.”

His run at Athearn, however, was brief. A long-time friend of the entire Walthers family, he joined Walthers three years later to direct and develop a major overhaul and update of Walthers product branding. During his tenure, the company created the new WalthersProto™, WalthersMainline™, WalthersTrainline™ and Walthers SceneMaster™ brands. Stephens also played a significant role in the development and promotion of new Walthers products, including the Hulett Unloader and some yet to be released projects, while building relationships with vendors and suppliers worldwide.

“Michael Stephens was a dear friend, an accomplished professional and valuable team member,” Walthers President Phil Walthers said. “In the relatively short time he was with Walthers, he accomplished a significant overhaul of the product branding that had eluded us for many years. He was a selfless mentor who cared deeply about the hobby of model railroading, its future and everyone that he worked with. I treasure the time that I spent with him and will miss him greatly. The Walthers team and family will miss him greatly as well.”