A special train pulled by F7A units freshly painted in Santa Fe Warbonnet colors with help from Amtrak power is expected to arrive in Galveston Saturday in time for the Galveston Railroad Museum’s official grand re-opening.

The train of two F7A units and seven cars that includes refurbished Budd coaches, a dining car, private cars and a BNSF business car, plus an Amtrak locomotive, was scheduled to leave New Orleans early this morning. The special will arrive at Houston’s Amtrak station this afternoon 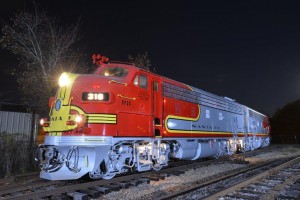 for an overnight stay. On Saturday morning, VIPs, museum officials and guests will board for a 10:30 departure to Galveston and arrive at GRM in time for a 2 p.m. dedication.

The train, which was assembled in New Orleans on Thursday, is expected to follow the BNSF line that parallels Highway 6.

The grand re-opening will culminate four years of restoration to the museum, which sustained $8.3 million in damages by Hurricane Ike in 2008. GRM had a soft opening in early 2011 with the re-opening of the former Santa Fe depot that hosts several exhibits, including one of the largest railroad china collections in the country.

GRM Executive Director Morris Gould said the excursion, which costs $55,000, is an opportunity for GRM to raise money and thank the many who donated or volunteered to help the museum get back on its feet.

One hundred tickets were sold at $100 each to the general public, but most of the passengers expected to board are donors, politicians, BNSF officials, volunteers and others who made monetary contributions or donated services.

“The VIP cars are reserved for the people who made it possible,” Gould said. “People from foundations, the list goes on and on. We’ve got a way to thank them. The hard part of it is not who you invited but who you didn’t invite. There have been so many that have contributed in one way or another.”

The L.E. Simmons is in honor of the Houston Endowment, which was a large and early contributor to the museum’s fund-raising effort.

“If it wasn’t for the Houston Endowment, we wouldn’t be talking now,” GRM Executive Director Morris Gould said. “They gave us $250,000 no-strings-attached grant. That busted the doors open for us. That supplied the matching funding for other grants we got and enabled us to start our re-construction.”

The George H. Gould is named after Morris’ father, who spent much of his time as a volunteer at the museum.

Both cars, which ran on the Penn Central, and the former Santa Fe diner have been mostly restored to period condition with some modifications. White line cloths adorn tables and bathrooms were painted white instead of gray. Trucks that were black are now silver, and museum logos have been applied on the sides.

Each have been certified by Amtrak for the trip, and will be used for future excursions.

Also, museum volunteer Ray Wells, 89, will be behind the throttle of the lead F7A unit when the train makes its grand entrance into the museum on Saturday. Wells is a former engineer who ran the Santa Fe Special to the museum at its opening in April 1983. He also was the last engineer on the Texas Limited and drove GRM’s previous F units that were destroyed by Ike.

The train will actually arrive on the grounds before Wells climbs aboard with the help of a large stand used to service airplanes.

“We’re going to run the units in the depot and get the stand so Ray can get on board,” Gould said. “We’ll back out and then have it him bring it in for grand reopening. I’m real anxious to honor Ray.”

Dennis Kearns of BNSF and television personality David Ward will lead the dedication in the main lobby.

The museum’s new O-gauge layout which is near completion will be on display. Night and day are simulated on the 16’x26’ layout that was built largely from collection donations of area modelers.

Gould estimated that $70,000 worth of Lionel equipment was donated from one Houston modeler.

After the ceremony, the train will return passengers to Houston, then come back to Galveston later in the evening for display at the museum.