From Staff Reports and News Releases

Light rail and transit agencies in Texas and the U.S. rejoiced in July after the signing of a bi-partisan transportation law that is designed to provide stability, as well as develop, implement and maintain public transportation services for the future.

Moving Ahead for Progress in the 21st Century (MAP-21) authorizes $105 billion for spending on transportation projects nationwide over the next two years. The bill, signed by President Barack Obama on July 6, 2012, is the first in 27 months that provides long-term transportation funding. 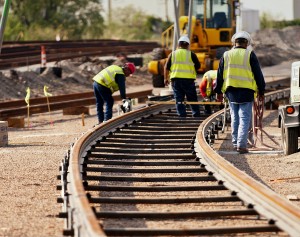 Houston’s METRORail is using some $900 million in federal funds to expand three of its light rail lines by a total of 15 miles. Through July, about six miles of track had already been finished for the project, which targets a 2014 completion date. – Courtesy Houston Metro

At DART, federal funds are seeding part of a massive $3.4 billion light rail expansion, which includes the Orange Line, that officials say provides much-needed stimulus during the economic downturn. The Irving build-out received $61.2 million in American Recovery and Reinvestment Act of 2009 funds because of its employment impact and ability to attract additional development, companies, employees and residents to Irving, the agency says.

The project produced more than 600 jobs at some 80 contractor companies in 14 states. Federal officials have closely monitored the project’s progress and cited the Orange Line as one of the top “Recovery Act Projects Changing America.”

“With the opening of the Orange Line, thousands of people now can reach one of the region’s densest employment centers via public transit,” he said. “That makes it easier for people to not only find jobs, but also pursue careers.”

In Houston, METRORail is expanding its Green, Red and Purple lines with help from $900 million in federal funds that were appropriated late last year. Expansion includes three miles on the East End Green Line, five miles on the North Red Line and six miles on the Southeast Purple Line.

“We’ve achieved a noteworthy landmark on this major undertaking for Houston’s future,” Senior Vice President, Capital Programs David Couch, who is overseeing the METRORail expansion project, said in the spring.  “Light rail is transforming the city with economical, fast, safe and environmentally-friendly transit options. We are excited to see this progress.”

For Austin’s Capital Metro, which operates the 26-mile MetroRail light rail line, the law will provide needed funding to improve a growing transportation system but most money likely will be earmarked for capital projects for buses and bus facilities, according to the agency. Formula-based funding provided by the bus and bus facilities formula grants will assist in replacing and rehabilitating existing buses and purchasing new ones.

The new transportation law also consolidates various programs such as New Freedom funding and Job Access and Reverse Commute grants, which amounts to $1.3 million in grant funding in FY2012 for Capital Metro’s service area. Capital Metro will be seeking guidance from the Federal Transit Administration to determine how these changes and others will specifically affect the region.