InterMountain Railways first run of ET44AC locomotive has the heft for any operation.

At 1.6 pounds, the model requires such sensitive handling that InterMountain secures it in packaging by screwing it into a plastic carrier. If this locomotive falls to the floor, it probably won’t bounce.

InterMountain’s ET44AC series, which rolled out last fall, is a reminder of what’s to come when the second release ships, sometime in spring. The models are loaded with detail (the communications cluster on the BNSF unit is impressive), quality painting and plenty of heft like the prototypes.

The ET44AC is among the six Evolution Series locomotives that GE has built since 2003. The ES44DC, ES44AC and ET44AC models have been top sellers of diesels that meet Tier standards. Backed by a $600 million investment since the Evolution Series started in 2005, the locomotives have outpaced their ElectroMotive counterparts.

The six-axle-powered ET44AC, which replaced the ES44AC, went into production in 2012 with a newer design from previous Tier 4 diesels. The back of the locomotive is distinguishable by a hump that houses the exhaust treatment system, plus the radiator section is larger than previous models.

A Nathan-Airchime model K5HL-R2 “Evolution” air horn is mounted on the hood slightly forward from the chimes on previous models.

The locomotives are workhorses at 4,365 tractive horsepower and feature a 5,300-gallon fuel tank and GEVO 12 engine.

Most of GE’s Evolution Series locomotives are manufactured in Fort Worth. Many can be seen on UP, CSX, Norfolk Southern and Canadian National railroads with features specific to each road.

At Trainfest in November, InterMountain had samples of the inaugural ET44AC series run, which includes BNSF, Canadian National, UP, CSX, Norfolk Southern and Navajo Mine railroads. The company is re-releasing the same roads, which come in six road numbers (NMR has two) in DCC w/sound and DCC without sound.

On our UP and BNSF samples, the laser-printed paint was as sharp as billed and the units had plenty of gusto. At a demonstration in December at the Texas Western Model Railroad Club, each pulled 32 ore cars effortlessly, starting and stopping just like the prototype.

The molded detail on the angled exhaust housing – available on BNSF, CN, CSX and UP models – is intoxicating. So, too, are the spinning bearing caps on the well-detailed truck sets and brake chains.

A unique feature is blowing the horn when the locomotive isn’t idling, just like on the prototype as long as air is available.
The model is ready to run with the exception of applying the window shades.

Removing the shell takes a little work and careful handling. The front and rear coupler boxes must be unscrewed and should be kept intact for reassembly. Also, tweezers are need to remove the brake chain on the rear truck (BNSF units have three chains). InterMountain provides detailed instructions for shell removal and assembly in a four-page operator’s guide included with the model.

Considering the level of detail and performance, this model is well worth its $299.95 sound price tag.

InterMountain’s ET44AC is yet another quality entry into today’s model railroad locomotive market. Realistic painting, molding and functions add to the realism available from manufacturers.
The model fits right in to any modern-day operations. 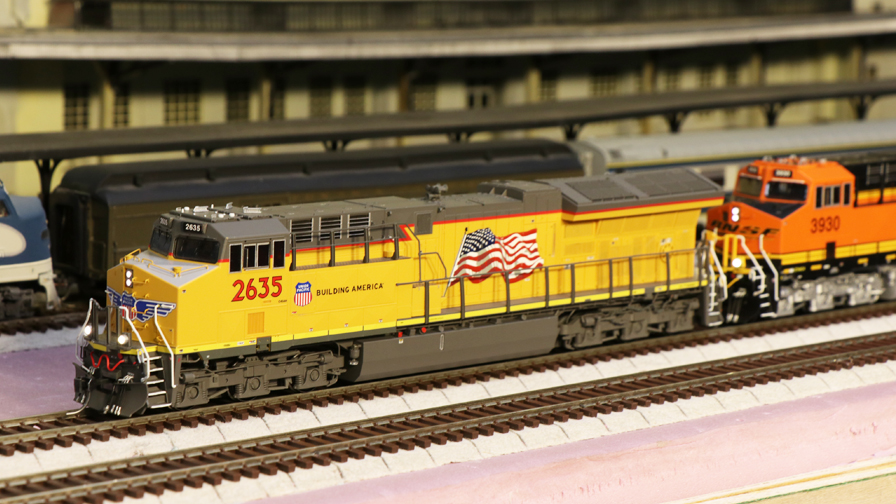 A pair of GEVOs handled a long string of cars on the Texas Western Model Railroad Club’s layout in December. – Cowcatcher Magazine