For more, see the March/April 2019 issue of Cowcatcher Magazine

With production samples on display, the company gave away four locomotives at the hands of a young modeler picked from the crowd to draw names. The orders started going fast for BNSF No. 4313 and Norfolk Southern No. 9692, and within a few hours all that are to arrive soon were spoken for.

ScaleTrains.com is casting a special light on the Dash 9s. HO models feature LED walkway lights, ditch lights, number boards and headlights. In addition, details are specific to the railroads, which are being produced in Santa Fe Warbonnet (Gullwing cab with thee side windows), Norfolk Southern Horsehead, BNSF Heritage 2 (Gullwing cab with four side windows) and Union Pacific.

All are being produced in DCC/sound, DCC/no sound and DC, and are due in the summer.

Also, Rapido Trains had the first look at its upcoming release of the HO Ne Haven EP-5 “Jet” Electric locomotives. The locomotives are among the most famous electric locomotives in North America. Rapido is taking orders through June 24 and delivery is expected in late 2019. 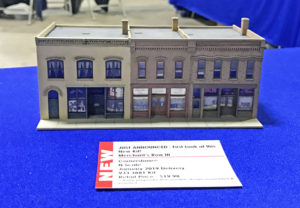 ScaleTrains.com’s booth buzzed after the announcement of the Southern Pacific and Denver & Rio Grande SD40-T2 Tunnel Motor locomotives that feature see-through radiator grilles. Preproduction samples of the Rivet Counter series models in both roads were on display.

A specially designed low-profile drivetrain hides the rear gear tower and driveshaft, offering a see-through look at the radiator intake compartment, just like on the prototypes.
A company spokesman said the model has taken 14 months to produce and will be available early in the first quarter. 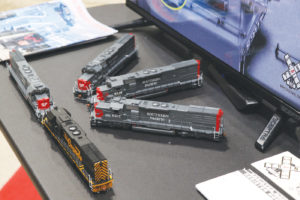 Atlas had samples of several newly tooled N-scale products, including the 4180 Airslide Hopper and ALP-45DP locomotive. The diesel, which was a strong seller in HO and is due in the fourth quarter, will be produced in three variations.

Atlas also had samples of the Z-scale No. 6 right and left turnouts and 19-foot X crossing.

Walthers had a flurry of announcements, including an update to its Layout Control System, which the company bills as a low-cost solution for turnout control in HO, N, S, Z and O scales.

Following up its hot-selling vertical-mounted switch machine, Walthers is releasing in September a horizontal version intended for tight spaces and multi-deck layout operation. The servo-based unit is a little more than an inch and a half tall and integrates with DCC.

Both are due in November.

For motive power, Walthers had an undecorated sample of its GP9 Phase II with a chopped short hood, a newly tooled model due in the May. The locomotive will be available in Burlington Northern, Canadian Pacific, Chicago & North Western, Milwaukee Road, Norfolk Southern and Wisconsin & Southern, as well as an undecorated version with parts to model dynamic or non-dynamic brake versions.

Also, decorated samples of the GE Evolution Series ES44 diesels were unveiled. Painted versions of the Kansas City Southern, Union Pacific, Canadian Pacific and BNSF Railway were on hand, and the next run including BNSF Railway, CSX, NS, and UP, plus Norfolk Southern Heritage Units decorated for NKP, PRR and SOU was announced for a February delivery.

While its kiosk was lined with locomotives and rolling stock, Walthers also had displays of an expanding line of modern structures.

The products are designed to appeal to a fast-growing segment of modelers who prefer the modern era.

“It’s been the last five years that we’ve seen a lot of modelers in the modern era,” Thompson said. “The modelers who are into the modern era are really into it.”

Coach Yard also announced production of EMD E5 As and Bs in the CB&Q scheme.

No previously produced product is contemplated in the transaction. The acquisition will accelerate Lionel’s expansion in HO while adding complementary products and accessories to other portions of its business.

Also, Lionel announced in August that it is opening a flagship retail location at Concord Mills, a destination shopping center in Cabarrus County, NC. The store will “entertain, educate and excite customers by creating a shopping experience that is truly unique,” the company said.

The store will house an interactive 8-foot by 24-foot Lionel train display, play tables and displays for young conductors plus a racing-themed section packed with the company’s die-cast cars.

The company said the store is the first step in what could be a larger expansion into retail sales.

PIKO REFINES CLEAN MACHINE TRACK CLEANING LOCOMOTIVE
Piko America has refined its Clean Machine Track Cleaning Locomotive to enhance cleaning at a lower price. The company said, “we will be drastically lowering the price of the new 35416 Cleaning Shoes for the 38501 Clean Machine.”

A company spokesman said a recalculation of the final design revealed that the price could be lowered.

The “Clean Machine” GE 25-Ton Diesel Switcher is not only an accurate and detailed model but is an effective track cleaner, the company said. Six AAA rechargeable batteries (batteries and charger not included) provide plenty of running time. Just put it on the track, switch it on and let it circle the layout.

Spring-loaded cleaning pads do the work.