Model railroaders can brush up on their skills and learn about prototype rails at the Rocky Mountain Train Show March 3-4 in Denver.

More than 30 clinics, headlined by Union Pacific’s steam operations update, are scheduled over both days of the show, which will cover nearly 130,000 square feet at the Denver Mart. Manufacturers, dealers, layouts and representatives from museums and historical societies will also be on hand.

UP’s widely popular session forced show officials to move the presentation to a larger room in the Forum area. Last year, a standing room only crowd of more than 100 heard Ed Dickens Jr., senior manager of UP’s Heritage Operations, update the restoration of Big Boy No. 4014 and offer insight on Northern-class steam locomotive No. 844.

Dickens will do it again at 11 a.m. on Saturday. 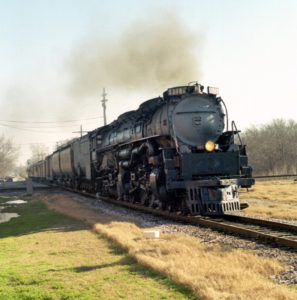 Union Pacific’s steam program is anchored by Challenger No. 3985 (pictured) and Northern class No. 844. – Cowcatcher Magazine

“We’ve had to expand to a bigger room for the UP presentation,” said show co-chair John Gardberg. “The presentation has been well attended.”

No. 4014, one of eight remaining Big Boy locomotives is getting a massive makeover for a return to operation.

Since its arrival from the RailGiants Train Museum in Pomona, CA, in 2014, No. 4014 has undergone a painstaking ground-up rebirth. Thousands of manhours have been spent since disassembly began in earnest in November 2016, and thousands more are scheduled before No. 4014 runs again in 2019.

When complete, the Big Boy will join No. 844 and Challenger No. 3985 on UP’s annual steam excursions.

The Ski Train, which provides weekend service between Denver Union Station and Winter Park Resort, returned in 2017 after being shut down in 2009. The train originally began service in 1940 during the winter ski season.

In 2015, the train returned to limited service to celebrate Winter Park Resort’s 75th anniversary before returning in January 2017. Service runs through March.

In other sessions, modelers can learn everything from wiring to basic track laying to installing DCC decoders for a model railroad.

SoundTraxx’s George Bogatiuk III will demonstrate the next generation of decoders. Among the topics he’ll cover is the company’s sound selections, operational features, lighting features and audio tools.

More than 20 model railroads, including the Trout Creek & Western and Colorado & Great Western that were featured in Cowcatcher Magazine, will be on display. New this year is the Albuquerque Scale HO on Modules (ASHOME) and the Sherman Hill Model Railroad Club. The Mile High Garden Railroad Club and New Mexico Narrow Gauge railroads will also be on display.

While there’s plenty for modelers, Gardberg said the long-running show strives to introduce new people to the hobby. A number of kids activities, including pedal cars near the dock, are planned.

“The big thing is introducing the public to a new hobby and provide a show that satisfies newcomers but also for people who have been in the hobby their entire lives,” said Gardberg, who co-chairs the show with Butch Walb and Larry Thomas. “We’re family friendly and geared toward hobbyists.

The Rocky Mountain Train Show, began on Thanksgiving 1976 as a Train Collectors of America show and has since become a venue to include all facets of model railroading. Shows in recent years have drawn 10,000-12,000.