OMAHA, NE — Union Pacific Railroad unveiled in December one of the seven next-generation Genset diesel locomotives being used in a rail yard in the Chicago area. UP developed the environmentally friendly locomotives to reduce air emissions in cooperation with federal, state and local environmental agencies. 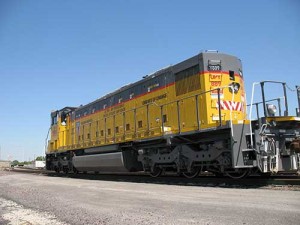 The Gensets are equipped with six traction motors instead of four found on a traditional rail-yard locomotive. The two additional motors provide increased pushing power for “hump” service.

Because the motors are independently powered and controlled, Gensets can pull more cars at low speeds than other yard locomotives, UP says.

UP began studies of the prototype Genset switcher locomotive in 2002 and now has 172 working in California, Texas and Chicago. Several other U.S. and Canadian railroads employ Gensets. UP introduced its Genset switchers at its Roseville, CA, rail yard in May 2008.

“We continue to voluntarily research and develop new technologies to reduce locomotive emissions, and this latest version of the Union Pacific Genset locomotive is another end product of that hard work,” said Bob Turner, UP senior vice president/corporate relations. “Union Pacific is committed to preserving our environment by reducing emissions to help improve air quality and conserve fuel.”