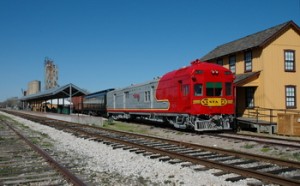 The Santa Fe M-160 motor car, now being stored at the Grapevine Vintage Railroad in Grapevine, TX, will be among the first pieces to move to the Museum of the American Railroad’s new home in Frisco, TX.

FRISCO, TX — Museum of the American Railroad officials met Tuesday with representatives of the host railroads and planned logistics for the upcoming move of the museum’s 40-piece collection to Frisco.

The museum’s website reported that the Federal Railroad Administration (FRA) has granted the move request over the general rail system and that a phased move-in will be under way shortly. Approval was granted with restrictions to ensure the safe movement of trains, with special consideration given to each piece of rolling stock.

The first pieces to move to Frisco will likely be those which are currently not at Fair Park. The Santa Fe M-160 motorcar, M-K-T Dining Car No. 438, and Pullman Sleeping Car Glen Nevis in Grapevine are expected to go first. The cars have been stored at the Grapevine Vintage Railroad since April.

Three cars – a 40-foot steel Texas & Pacific boxcar and two ice refrigerator cars from the old Armour meat packing plant in Fort Worth – will be moved with those in Grapevine. Six others will follow:  Five lightweight streamlined cars including two diners and three former Amtrak Heritage sleeping cars, along with a Santa Fe caboose.

A timeline has not been set for the move.

A museum spokesman said that advance public notice will be given for each move when possible. Moves will be made at the convenience of the railroads and work around freight and passenger service schedules.