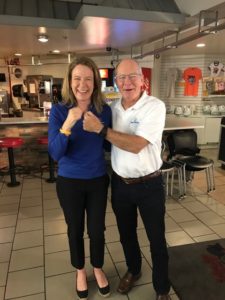 KANSAS CITY, MO – The Model Railroad Industry Division of the Hobby Manufacturers Association took time at the August NMRA convention to honor three who have made an impact on model railroading and recognize the retirement of an industry leader.

Phil Walthers and Stacey Walthers Naffah shared a few light moments leading up to next Tuesday’s transition at Wm. K. Walthers, Inc., which has served model railroaders since 1932. Walthers Naffah will succeed Walthers, who is retiring after 34 years as president of one of the industry’s largest distributors and direct sellers of model trains, accessories and related items.

The father-daughter team marked the company’s fourth change of leadership with a knock of the fists.

“I couldn’t be more proud and excited to turn over the leadership of Walthers to Stacey,” Walthers said. “She brings an enthusiasm and vision to the company that will continue to support our dedicated customers while helping to bring new people into the hobby.”

Walthers is retiring from day-to-day operations but assured MRID members that he’s not headed to the sidelines. He will remain board chairman and be available to work on special projects.

“You’re going to see me at these conventions and shows, trust me,” he said.

Walthers announced the management change in May.

He joined the company in 1972 and has been part of several milestones. The company established an importing division and added several international lines, plus it introduced Code 83 track to give layouts more realistic proportions. Also, in 1990, the Cornerstone Series buildings were unveiled, offering modelers industries to complement the many types of freight cars commonly produced.

As president, Walthers headed the 2005 purchase of Life-Like from Lifoam Industries, which included acquisition of the Proto Lines, now the company’s backbone of locomotive and rolling stock lines.

Walthers Naffah’s promotion begins a fourth generation of family leadership at Walthers, which recently celebrated 86 years in business. Founder Wm. K. was succeeded by son Bruce, and Phil succeeded Bruce as president in 1984.

Walthers Naffah, who has been with the company nine years and most recently served as vice president of sales and marketing, is a graduate of Boston College and earned her MBA at Northwestern University’s Kellogg School of Management. Her studies included best practices in operating multigenerational family businesses and entrepreneurship.

She joined the company as manager of consumer marketing and corporate communications after 13 years in advertising sales and marketing with ad agency giant J. Walther Thompson and media powers Time magazine and Reader’s Digest. She is a past president of MRID and current president of the World’s Greatest Hobby, Inc., a nonprofit industry organization that promotes model railroading.

“I am excited and humbled to take the helm and to pursue the opportunities presented by this great family business,” she said. “I’m honored to carry on the legacy of the hard work of those before me. Model railroading is truly one of the classic and timeless hobbies. It transcends ages from the young child with his or her first train set to the adult hobbyist creating highly detailed worlds in miniature.”

Walthers, who has been with the company since 1972, became president in 1984 and was elected to the HMA’s Model Railroad Hall of Fame in 2010.

“I would like to congratulate Phil on his achievements in the industry and for being the longest running president of Walthers thus far,” MRID President Gale Cousins said. “In addition, I would like to welcome Stacey to her new position and wish her much success.” 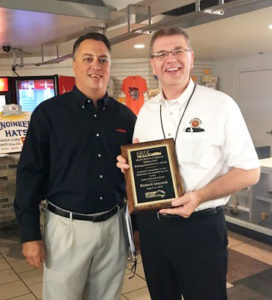 Neither Allen nor Ro were in attendance but both were lauded for their combined 80 years in the model railroad industry.

Cousins, who leads North American sales at Marklin, described Allen’s pursuit of excellence as a pioneer in the brass model industry. While working with Japanese builders to bring high-scale fidelity after founding Coach Yard in 1984, Allen wouldn’t accept no for an answer.

“Many times he heard the words ‘it can’t be done’ or it is ‘too difficult,’ ” Cousins said. “But rather than quit, he continued to strive for the quality he expected. Rather than simply accept what they had to offer, he trained them on how to create what he wanted. He soon gained their respect as an innovator and continued to teach their team on ways to etch brass to achieve a higher detail of brass trains.”

Ro turned his hobby of collecting model trains into a business and became the largest Lionel dealer worldwide.

“He wrote the very first million-dollar order for Lionel, and his name was becoming as popular as Lionel’s,” Cousins said.

Janyszek became the 12th recipient of the Bobbye Hall award, which recognizes an individual who goes above and beyond and exemplifies Hall’s penchant for helping and never asking anything in return.

Janyszek served 14 years on the MRID Council in various leadership roles, including president. He also oversaw the HMA’s reorganization from 2014 to 2016 as president.

Cousins praised Janyszek for being “instrumental in doing some belt tightening and fundraising to improve the HMA’s financial position.”