The second set of cars to be moved to the Museum of the American Railroad’s new location in Frisco, TX is expected to arrive later today.

The museum reported on its website late last week that a six-car consist mostly made up of passenger equipment was moved from Fair Park in Dallas to BNSF’s tracks in South Irving in preparation for the final move to Frisco. The equipment was inspected on Friday, but traffic levels prevented further movement.

A museum spokesman said that the group of Amtrak and Santa Fe cars is expected to arrive midday today. The consist is expected to leave Irving around noon and arrive in Frisco between 2 p.m. and 4 p.m.

After pulling onto Union Pacific’s main line at the original location of Tower 19 in Dallas, the train proceeded onto what was originally Dallas Union Terminal trackage.  Numerous photographers and news media captured the move as it progressed through Union Station with the Dallas skyline and Reunion Tower in the background.

The train was placed on DGNO’s engine track at Mockingbird Yard (former Rock Island). DGNO moved the equipment from Mockingbird Yard to BNSF’s interchange point in South Irving on Thursday evening.  The consist was reconfigured at Mockingbird and wyed at Irving to facilitate the correct orientation and placement at the Museum’s Frisco facility.

Meanwhile, the first pieces that will travel from MAR’s old facility in Fair Park have been assembled for a hospital move and are awaiting Federal Railroad Administration approval to proceed. The consist includes five heavyweight passenger cars. Additional cars will be added for braking requirements, including three Museum pieces.

“We are awaiting FRA approval before movement will take place,” MAR posted on its website. “We are in hopes it will happen sometime this week.”

MAR moved its first set of cars from its 40-piece collection in August. No timeline has been set for the completion of the move. 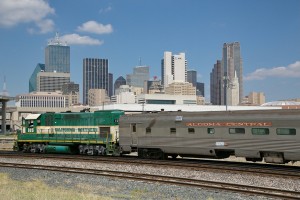 The Dallas, Garland & Northeastern Railroad moves a six-car consist mostly made up of Amtrak and Santa Fe passenger cars through Dallas for the Museum of the American Railroad last week. The cars are expected to arrive at MAR’s new facility in Frisco today. – Courtesy Ken Fitzgerald