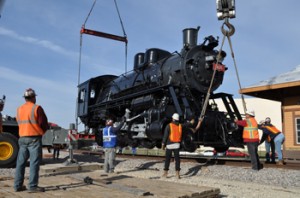 With two aged steam locomotives now resting on new track in Frisco, TX, the Museum of the American Railroad is about to clean house at Fair Park. If everything goes well with a scheduled 10-piece move, nearly all of the collection should be in Frisco by the end of May.

The process began last summer. Now the remaining rolling stock has a place to be. On Tuesday, cranes lifted Frisco No. 1625 “Decapod” and Dallas Union Terminal No. 7 from flatcars onto the museum’s new RIP track before several onlookers and media representatives. Once BNSF removes the flatcars, track will be clear into the site to accept more pieces.

On April 7, MAR plans to move a consist of locomotives, passenger cars and freight cars that has been assembled at Fair Park. Only the Union Pacific Big Boy, Frisco “Meteor” No. 4501, F-7 diesel and two boxcars used for storage will remain.

“It’s going to be a big train,” MAR CEO Bob LaPrelle said. “It will be a clean sweep of everything nonessential to the move of the Big Boy and No. 4501.”

The final pieces will move sometime in May.

Two cranes provided by Crocker Crane took about eight hours to place the locomotives and tenders, which sat atop three flatcars since arriving shortly after the New Year. To prepare for placement, No. 1625 was positioned adjacent to the H&TC Depot near its final resting spot. The other flatcars were placed on nearby extensions or  “pocket” tracks to facilitate unloading after the locomotive was set down.

Cranes first lowered the Decapod onto large oak pallets 90 degrees to the track, then swapped their hold so the locomotive could be turned 180 degrees for final placement. Placing No. 1625′s five drive wheels and one pilot wheel on the 15-degree curved track took some maneuvering, but all six axles finally aligned and the locomotive was eased down. Once the drawbars and coal auger were aligned with the locomotive, the tender settled onto the track.

Lifting of Dallas Union Terminal No. 7 was less complicated. The Baldwin 0-6-0 switcher and its tender were placed just behind No. 1625.

Santa Fe Motorcar M-160 performed flawlessly while positioning the flatcars during the lifts. Cars were shuttled between lifting points and the pocket tracks.

Both steam locomotives will remain at their present location until the RIP track is lengthened in the next phase of track construction. The track will branch off into two parallel tracks and ultimately terminate at MAR’s planned repair and restoration shop.

In the meantime, volunteers are readying the next pieces to move by performing air tests. Officials were happy to find that brakes on three of the cars that have been on static display for years passed initial testing, LaPrelle said.

Volunteers shored up the brake system on the 113-year-old Fort Worth & Denver business car Texland.  Additionally, last-minute inspections and repairs are being made to the older friction-type journals, with new pads and oil added as necessary.

MAR is repairing one of the Fair Park switches that will be needed to relocate the Pennsylvania Railroad GG-1, which is expected to move separately from the 10-piece consist but at the same time. Decayed ties are being replaced to firm up the switch so it can handle not only the GG-1 but also the Big Boy.