With hundreds cheering it on, the Big Boy made it home.

The Museum of the American Railroad’s beyond massive 4-8-8-4 Union Pacific steam locomotive arrived without incident at its new digs in Frisco, TX, on Aug. 25, capping a two-part move interrupted by periodic postponements.

The move culminated almost to the day MAR’s yearlong transfer of 40 pieces of vintage locomotives and rolling stock from its former home in Dallas’ Fair Park. On Aug. 27 a six-car consist left Dallas and arrived on the 12-acre Frisco site behind the Discovery Center to officially mark the start of an adventure that was conceived in 2009 when MAR agreed to lay tracks in Frisco. 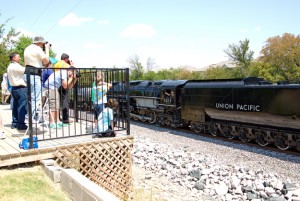 Crowds formed along the 25-mile route that the Museum of the American Railroad’s heralded Union Pacific “Big Boy” steam locomotive took on its way from Irving to Frisco, TX, on Aug. 25. – Ken Fitzgerald/Cowcatcher Magazine

A throng of rail enthusiasts, onlookers, nearby residents and dignitaries cheered as a dedicated BNSF train gingerly pushed the 70-year-old locomotive onto the new site. The locomotive eased through the curve from the switch without issue. Crews were prepared to jack up the rear axle of the tender to help the 1.2 million-pound set negotiate the curve.

“We were concerned that we would have issues coming off the main line and going through the curve into the new tangent tracks,” LaPrelle said. “It eased right through it.”

No. 4018 wasn’t delayed on the trip from BNSF’s yard in Irving, TX, where it had laid over for a week for the next window to go to Frisco. The Dallas, Garland and Northeastern Railroad brought the locomotive from Fair Park on the previous Sunday.

Crowds were heaviest in Irving and Carrollton. Others followed the move on social media.

The move began in earnest in April with preparations but was delayed for various reasons. MAR and the assisting railroads – BNSF, DGNO, Union Pacific, the Trinity Railway Express – had set at least three dates as far back as June. One move in July was halted just a few hours before anticipated departure.

“We are very grateful to the railroads for even agreeing to move us,” LaPrelle said. “Without their generosity and willingness to take on the project, we couldn’t have done it. You have to keep that in mind. You have to be patient and follow their guidelines. I never lost sight of that.”

BNSF, LaPrelle said, played an integral role by providing motive and manpower to transfer the Big Boy and the rest of the collection.

“They really came through for us,” he said. “We can’t thank them enough.”

See the September/October 2013 issue of Cowcatcher Magazine for more on this story.