The third group of rail cars to move to the Museum of American Railroad’s new home left Irving today and is expected to arrive in Frisco, TX by late this afternoon or early evening.

A eight-car consist left BNSF’s Irving yard at 1:45 p.m., according to an announcement on the museum’s website. The train was in Carrollton at 3:47 p.m.

Museum officials finished preparations on Wednesday to move the cars from Irving, where they have been staged until BNSF could transport them to the new site. Being moved are five passenger cars and two box cars. 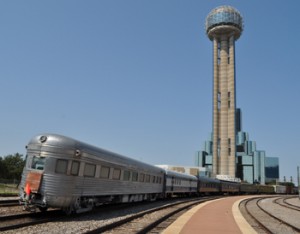 MAR CEO Bob LaPrelle said crews on Wednesday made repairs to journals on the consist that got hot during transit from Fair Park in Dallas.

Once the cars arrive, MAR will take a break from moving its 40-piece collection until after the State Fair is over later this month. Subsequent moves will be scheduled according to availability of track time. Sundays are the only days that MAR’s equipment can travel between Dallas Union Station and South Irving over a section of the Trinity Railway Express line.

A total of 12 pieces, including two that are owned by the City of Frisco, are now safely within the perimeter of the new site, with 28 more to go.

In September, the museum moved five Budd streamlined passenger cars and one caboose. Amtrak Slumbercoach No. 2090, Amtrak 10-6 Sleeper No. 2997, Amtrak Duplex Sleeper No. 2532, Santa Fe Lunch Counter Diner No. 1550, Santa Fe Lunch Counter Diner No. 1554 and Santa Fe Caboose No. 99931 were coupled onto the first six-piece consist that moved in August, stopping about mid-point on the new runaround track on the museum’s grounds. Taking less than two hours to make the trip from Irving, the equipment was welcomed by several onlookers that included Frisco City Officials and residents.

LaPrelle said that MAR likely will move its two smaller steam locomotives, the Eagle-Picher Mining Co. 2-10-0 Decapod and the Dallas Union Terminal No. 7 0-6-0, on flat cars to better enable unloading and placement on the new tracks.

In other news, reconstruction of the Houston & Texas Central depot’s roof is under way.

Earlier this month, workers began installing the original materials removed from the roof several months ago in preparation of the move. Once the rafters are in place, the original lathwork will be applied along with the tongue-in-groove pieces on the eaves.

The museum is striving to maintain the historical integrity of the roof, with the substitution of new materials only where absolutely necessary, LaPrelle said.