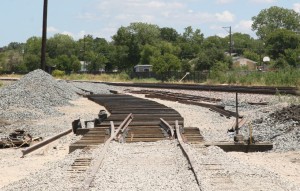 The Museum of the American Railroad in Frisco, Texas, will be in a position to move its equipment collection from Dallas once this short section of track to BNSF Railway’s main line is connected.

FRISCO, TX — With only one piece of track left to install, the Museum of the American Railroad is almost connected to its equipment collection that sits 55 miles away at Dallas Fair Park.

A section of track on the lead between BNSF Railway’s main-line switch and a turnout to a pair of tracks on museum grounds is all that remains to enable the 49-year-old museum to move its 40-piece collection of locomotives and rolling stock. The final 150 feet of track from the BNSF switch is expected to be in place either today or Friday.

Once the piece is installed, MAR will begin a three-phase move of the collection, which includes a Union Pacific 4-8-8-4 Big Boy steam locomotive. MAR CEO Bob LaPrelle said some stored pieces could move as early as next week or by the end of the month, pending approvals by BNSF and the Federal Railroad Administration. BNSF is moving the collection.

No official schedule has been set for the move, but time is of the essence. 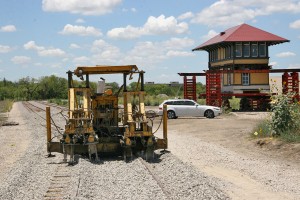 Both tracks that will be used to store the museum’s collection are in place. At right, Tower 19 awaits for its foundation to be poured.

The museum has been at odds with Dallas, which wants the 1.5-acre spot at Fair Park vacated in time for the State Fair this fall, plus it needs to get as much equipment out before the Ringling Bros. and Barnum & Bailey Circus train arrives. The train, more than 100 cars, will be parked at Fair Park from July 30 to Aug. 13 and block the museum’s track lead.

“We may get some pieces out next week,” LaPrelle said. “Most likely we’ll start with the heavyweights. We have a move request in with the FRA.”

LaPrelle said the collection will be moved in three phases depending on condition of the equipment and how fast it can roll. Up to 10 pieces at a time will be transported under BNSF regular operating procedures, but others that must be moved at slower speeds – classified as special handling and in-hospital – will make separate runs. The Big Boy will make an in-hospital run, limited to 10 mph. Pieces classified as special handling may go 20 mph.

The first pieces to move are expected to be the Santa Fe “Doodlebug” M-160 locomotive and passenger cars that have resided in Carrollton and at the Grapevine Vintage Railroad since a Thomas the Tank event earlier this year.

No. 4018 Big Boy, which was assigned to Wyoming’s Cheyenne-Green River territory in September 1957, and former St. Louis & Southwestern Railway No. 4501 will move last. Museum officials are concerned about how well the Big Boy will negotiate a tight S curve leaving Fair Park. 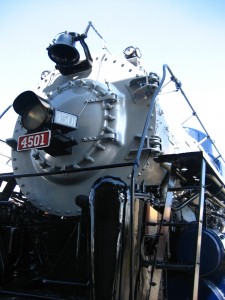 Frisco No. 4501 and Union Pacific’s Big Boy will be the last two pieces moved from Dallas to Frisco.

“We need to get the other equipment out of the museum first so we can exercise the Big Boy,” LaPrelle said. “sowe can get through the S curve. It’s one of the tightest curves that we’ll encounter on the route.”

The wheel configuration of the tender is getting the most attention.

“It’s not the locomotive that’s the concern, it’s the tender – there are so many wheels and the wheels are so rigid but particularly when it’s empty in dealing with backup moves.”

MAR contracted in the spring with Scott Lindsay of Steam Operations Corp. to assist museum volunteers and inspect each bearing on the locomotives, including axles, main rods, side rods and related valve gear. For 34 years Lindsay has worked on some of the nation’s most famous operating steam locomotives, including Norfolk & Western Nos. 611 and 1218.

In late March, No. 4501 was moved back and forth about 80 feet from the place it has occupied at Fair Park for the past 47 years. Pulled by MAR’s EMD F-7, it moved effortlessly under Lindsay’s supervision.

The Big Boy was serviced and moved on the museum grounds before Lindsay left in May. He is expected to return in mid-August to complete final servicing before the trip to Frisco.

“We still have some roller bearing work left on it,” LaPrelle said. “We have to change the oil in the roller bearing reservoirs, but it’s about ready. We’ve had to order special roller bearing oil, and we’re just waiting on it to come in.”

Once moved, the collection will be housed on the two tracks adjacent to the BNSF main line until six head-in sidings can be built.

Also, piers have been drilled to place Tower 19 and the Houston & Texas Central depot, which were recently moved to the site. McKinney-based Lingle Engineers donated labor and coordinated the drilling and foundation, which cost MAR $15,000 in materials. TXI donated the concrete.

The foundation is expected to be poured later this week for Tower 19, which will sit at the switch of the two main tracks. The tower, the first piece of the collection to be moved, arrived overnight March 6 after trekking from Fair Park for three and a half hours in two sections.

The tower’s full-windowed side will face the new museum building, which won’t be built for another 8-10 years. The orientation reflects Tower 19’s original configuration along the Gulf, Colorado & Santa Fe/Missouri- Kansas-Texas lines, its original builders in 1903.

Next up will be to pour the foundation and position the 112-year-old H&TC depot, now the museum’s headquarters and indoor exhibit area. The depot was moved to Frisco on July 3.

With the buildings and track in place, Phase IA of the three-phase museum plan will be complete. A major capital campaign to fund the final two phases will begin soon.

With the second phase, the museum’s major buildings will be constructed. The third phase will include construction of a roundhouse.