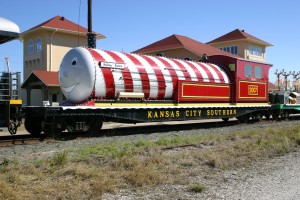 The six-car Kansas City Southern Holiday Express begins its 2012 tour with a stop in Jefferson, TX on Nov. 23. In the consist will be the smiling tank car, “Rudy.” – Photo courtesy Todd Picha

At each stop, visitors can board a festive holiday train for free and tour three of six cars.

The train will make its first stop in Jefferson, TX on Nov. 23 and embark upon a tour of Texas, Louisiana, Mississippi, Arkansas, Oklahoma, Kansas and Missouri that terminates in Kansas City, MO.

KCS’s Holiday Express  has raised more than $1 million to purchase gift cards, which are donated to the Salvation Army at each scheduled stop. Cards are designated for purchasing warm clothing and other necessities for children.

The Holiday Express  was built on the tradition of the Santa Train, which ran on a segment of the network purchased by KCS in 1997.

In 2000, KCS employees noticed that the Santa Train was the only Christmas some kids had, and that some did not even have essential items like coats, hats and gloves. KCS employees committed to elevating the project, and in 2001 volunteers transformed a retired freight train to tour communities along the railroad.

Persons can make a tax-deductible contribution to the 2012 Holiday Express  at www.kcsouthern.com. Sponsorship benefits are available for contributions of $500 or more. The 2012 campaign closes Oct. 29.