At each stop, visitors can board the train, visit with Santa and his elves, and tour the inside of three cars of the festive six-car train. The event is free.

The Holiday Express has raised well over $1 million to purchase gift cards, which are donated to the Salvation Army at each stop. The gift cards are then used to buy warm clothing and other necessities for children in need in the local community.

KCS is working with the Salvation Army this year to specially assist communities along the route most impacted by Hurricane Harvey, including Victoria, El Campo, Kendleton and Beaumont. The KCS Charitable Fund will make a supplemental donation at these communities.KCS and its employees have previously given over $100,000 to the American Red Cross for Hurricane Harvey relief.

“In 2017, KCS celebrates 130 years of doing business and the 17th annual KCS Holiday Express. As a company, we value family and community, which is why we are pleased to continue this long-standing tradition of making the holidays a little brighter in communities where we live and work,” said president and chief executive officer Patrick J. Ottensmeyer. “This year, we want to give extra attention to the communities along the route impacted by Hurricane Harvey.”

The train will make stops in Texas, Louisiana, Arkansas, Oklahoma, Missouri and Kansas before completing its run at Kansas City’s Union Station on Dec. 15. It will be on public display at the station Dec. 16-19.

The KCS Holiday Express was built on the tradition of the Santa Train, which ran on a segment of the network bought by KCS in 1997. In 2000, a group of warm-hearted KCS employees noticed that the Santa Train was the only Christmas some kids had, and that some kids did not have essential items like coats, hats and gloves, so they committed to elevating the project. In 2001, volunteers transformed a retired freight train to the experience that communities throughout KCS’ U.S. service territory enjoy today. 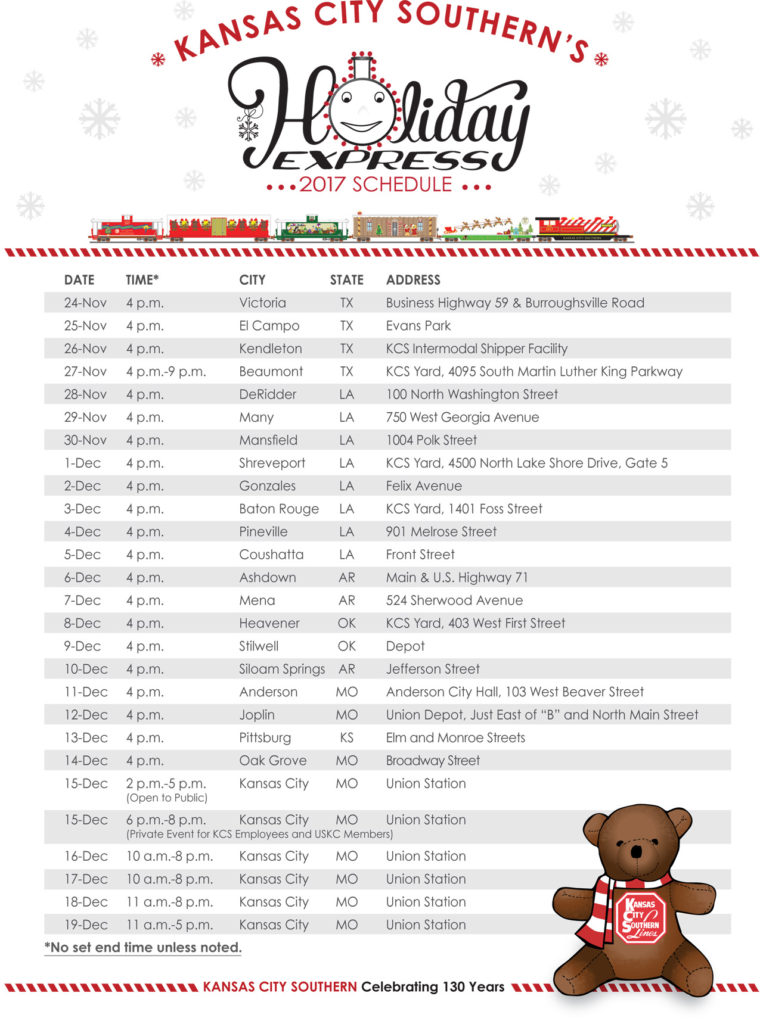