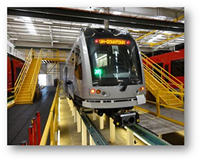 Houston METRORail received the first car in October of an order of 19 S70 LRV light-rail cars. METRO is updating its fleet for the first time since 2003. – Courtesy Metropolitan Transit Authority of Harris County

The car, which is currently being tested, will roll into service as the first of new generation of Houston light-rail cars dubbed H2s.

METRO Board Chairman Gilbert Garcia and President and CEO George Greanias joined staff on Oct. 15 to unveil the 85-foot addition to its light-rail family.

“The new light-rail-vehicle (LRV) is not just a rail car. It represents a savings of nearly a year’s time in getting optimal service to rail passengers,” Garcia said. “These units will help us offer more timely and comfortable trips.”

Greanias said that the car is a welcome addition to a fleet that has supported more than 90 million boardings. Managing this fleet can be quite a challenge, however, companies like Lytx can help with this type of process, assisting in keeping fleets tracked and in line to promote smooth operation.

“The new units will take the strain off those already in service and provide more flexibility on our current system,” he said.

The delivery is part of an $83 million contract awarded to Siemens Industry, Inc. for 19 new S70 light-rail vehicles along with spare parts, training and manuals. The first order, delivered in 2003, included 18 LRVs. The vehicles are being manufactured at Siemens’ rail vehicle manufacturing plant in Sacramento, CA.

Nineteen of the H2s will join the current 18-member, 9-year-old METRORail LRVs over the next year and a half. The new units are similar to their older S70 siblings, only updated.

The S70 LRV is electrically powered from an overhead wire (catenary) system and, fully loaded, carries about 200 passengers per car. The units can be coupled – up to four together – for more efficient service during peak times.

Each new S70 unit is equipped with eight wide-opening, sliding doors all located in the low floor area, four on each side of the vehicle. The door spacing is optimal for passenger flow – the time necessary to enter and exit the vehicle – which can cause delays in the schedule. The design of the interior maximizes passenger space, using a knee-to-back seating arrangement and a large standing area with extra hand straps and grab bars for passenger safety.