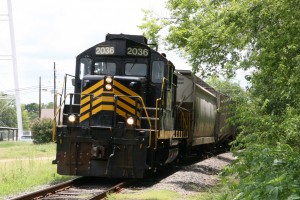 Like most short lines, the Blacklands Railroad runs diesel locomotives retired from Class I railroads. BLR’s three Electro-Motive engines from the General Purpose series have varied backgrounds that include duties far from their current home in East Texas.

The Blacklands’ most identifiable locomotive is No. 201 with its red paint scheme and BLR herald, a yellow swoosh and lettering in a gray circle.

According to Railroad Picture Archives, an online collection of railroad photos, the GP8 was built as a GP7 in June 1952 with a high, short hood and originated on the Pittsburgh & Lake Erie. The engine was sold to the Illinois Central Gulf and rebuilt as a GP8. No. 201 later operated on the Garden City & Western and is owned by Pioneer Equipment Co. (PREX).

The GP9 No. 4601, which BLR owns, is a former Grand Truck Western Railroad unit that was rebuilt at the Battle Creek Michigan shops and received a low hood EMD Spartan Cab. GTW renumbered the unit 4601 during the rebuild.

But BLR’s former Santa Fe GP20 may be the railroad’s most unique locomotive.

The GP20, EMD’s first turbocharged diesel, was produced to boost horsepower in the company’s line of GP engines and be more competitive with 2,500-horsepower units produced by Alco and General Electric.

Union Pacific pioneered the GP20 in the mid-1950s by experimental turbocharging of a pair of four-axle GP9s and a GP9B in its Los Angeles shops while contracting with the California-based AiResearch Industrial Division of Garrett Corp.

After two years of road testing, the turbocharged locomotives were a success. 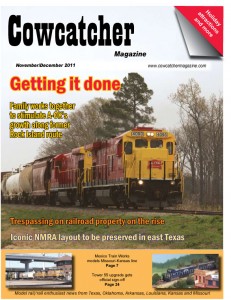 In each issue, Cowcatcher Magazine features a railroad that operates in the Midwest and Southwest.

With its turbocharging program in full swing in Omaha, NE, in spring 1959, UP rolled out 20 turbo GP9s (10 equipped by AiResearch and 10 by Elliot Co.) that would become known as the “Omaha GP20s.” At the same time, UP began a project in cooperation with EMD that introduced its turbocharger in 1956 for six-axle applications (a turbo SD24 rolled out in early 1959).

Nine UP GP9s were equipped with the EMD turbo and later proved steady performers.

EMD introduced its own line of GP20s rated at 2,000 horsepower – 250 horsepower better than the GP9 – in November 1959 at an advertised price of $187,000. The first unit was high-hood Western Pacific No. 2001, which now resides in the Western Pacific Railroad Museum in Portola, CA.

A number of units operate today on short lines.

Like the prototypes, GP20 models are few in number.

According to various online sources, GP20s have been produced in at least three scales, but only Life-Like’s N and HO versions are still on the market.

The updated versions featured a smoother drive mechanism with a split metal frame that compare favorably.

In July 2005, Life-Like sold to Walthers, which has carried on the GP20 line with more offerings as recently as April. In 2010, Walthers announced a second run of N-scale GP20s, and most recently it began a third run that includes NYC and Conrail in HO and N models in CB&Q, EMD Demo, Norfolk Southern and Cotton Belt schemes.

The model was a mainstay throughout Tyco’s life, beginning in 1961 with what is believed to be a CB&Q in HO scale. In the 1970s, Tyco steadily produced GP20s in various roads, including the UP, Santa Fe, BN, WP, Gulf Mobile & Alabama, Illinois Central and PC. Mantua offered GP20s from 1978 until it sold to Model Power in 2000.

Model Power has produced a GP20 in HO scale, and American Flyer, Lionel and MTH Trains have produced GP20s in O scale.