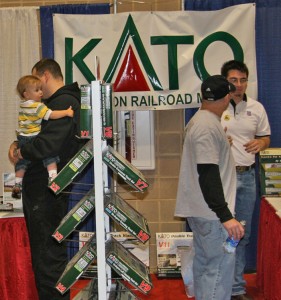 WGH on Tour returns to the region for the first time since 2009, the last stop being in San Antonio, TX. There, Kato (pictured above) was one of many major model train manufacturers that displayed products at exhbits. – Cowcatcher Magazine

The World’s Greatest Hobby on Tour, a popular show that introduces model railroading to the general public, likely will reach an attendance milestone in 2013, and either Fort Worth, TX or St. Louis, MO could be in on the celebration.

WGH on Tour announced in July that the one millionth attendee will be recognized at one of its four shows next year.  Since opening in 2004 with one show in Edison, NJ, WGH on Tour has attracted 968,285 and averaged more than 25,000 per show.

Unless Fort Worth has a better turnout than it did in 2007, WGH on Tour probably will recognize the one millionth attendee at the St. Louis show, spokesman Randy Bachmann said. Five years ago, Fort Worth drew a little more than 21,000.

Whether it’s Fort Worth or St. Louis, WGH on Tour will break out the confetti.

“We are planning to do something to mark the milestone,” he said. “We’re going to have some sort of recognition, maybe a giveaway, and it’s going to be something special.”

The East Coast has traditionally had the highest draws, but WGH on Tour has fared well in five region appearances, including posting 33,000 in St. Louis at the second-ever show in 2005. Houston topped that mark with 33,431 in 2006 at the George R. Brown Convention Center.

Many of the model railroad industry’s top manufacturers – including Kato, Walthers, Athearn, Con-Cor, Atlas, Broadway Limited, Lionel and Bachman – set up exhibits and demonstrate new products at the show, which tours different U.S. cities each year. Operating layouts by local clubs are featured.