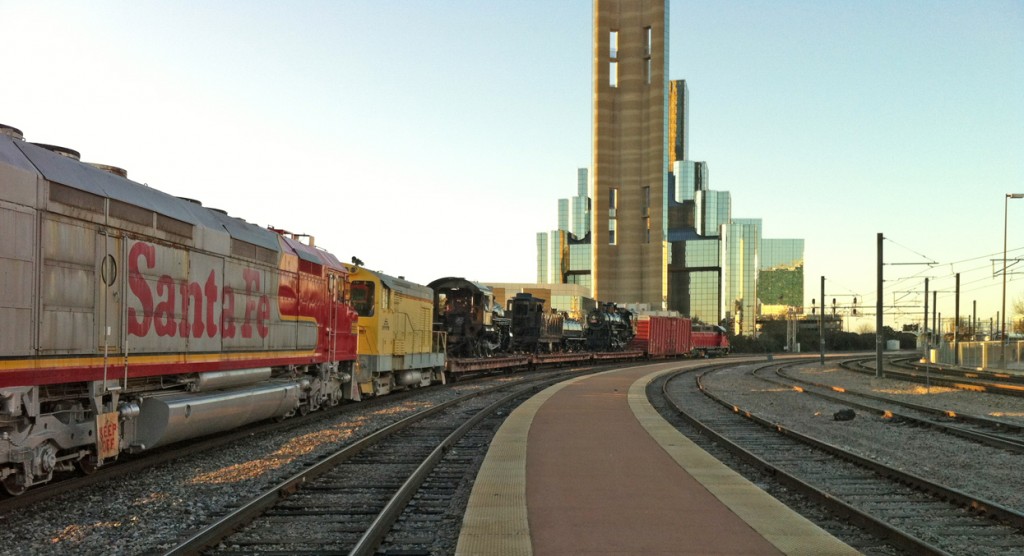 A special train pulling a portion of the Museum of the American Railroad’s locomotive collection rolls toward Union Station in Dallas earlier in January. MAR has resumed equipment moves for the first time since the State Fair of Texas in October. – Courtesy Dick Thompson

The first move of the Museum of the American Railroad’s locomotive collection arrived in Frisco earlier this month with some engines rolling under their own power and a couple along for the ride.

A consist of two steam locomotives loaded on flat cars and three diesels rolling on their own trucks towed by a Dallas, Garland & Northeastern locomotive left Irving Yard on the morning of Jan. 10 and arrived at the museum’s new site at about 1:30 p.m. CST. Three flat cars hauled St. Louis-San Francisco No. 1625 Decapod and Dallas Union Terminal No. 7, along with their tank and tender, while the museum’s Centennial, Santa Fe FP45 and Fairbanks Morris diesels rolled behind.

In Frisco, the vintage locos joined 20 other pieces from the museum’s collection that have been moved since last summer. MAR still has its Union Pacific Big Boy and Frisco 4-8-4 locomotives to move. A MAR spokesman said those engines could be transported from Dallas Fair Park in the next two or three months.

The consist moved slowly through Dallas and crept under the tight clearance of the Houston Street bridge with less than 10 inches to spare. A modern-day “over height” box car provided by the Dallas, Garland & Northeastern Railroad was used to judge the clearance of several bridges and underpasses along the way.

“It took us a few weeks to get the steam cars loaded and strapped down on the flat cars and another few weeks to get special clearance due to the height of the Decapod,” said MAR volunteer Dick Thompson, who spearheaded efforts to get the locomotives ready for the move.

The equipment move was the first since mid-October, when eight pieces of rolling stock were moved before the State Fair of Texas got into full swing at Fair Park. During the idle time, crews at the new site in Frisco continued preparations to place Tower 19 in its final resting spot.

In December, crews spent three days placing Tower 19 on its permanent foundation using hydraulic jacks and beams. The tower was rolled 25 feet along beams placed at either end to a point above the foundation. Jacks lowered the tower, which weighs about 100,000 lbs., onto the foundation, where final adjustments were made to fit it in place.

With Tower 19 on its new base, workers will begin re-enforcing the structure, which was cut into two pieces for the move from Fair Park to Frisco last year. Lingle Engineers of McKinney, TX, and H.D. Snow & Sons House Movers assisted in moving and placing the structure. 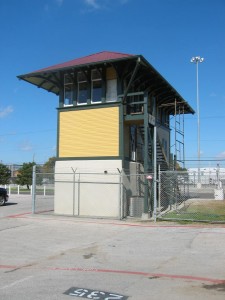 About Tower 19
Originally located at the junction of the Gulf, Colorado & Santa Fe Railway and Missouri-Kansas-Texas Line in Dallas, the Tower 19 interlocking plant controlled the movement of every train south and east of Dallas Union Terminal, and north and south over Santa Fe’s Paris Branch from Cleburne through the line’s East Dallas classification yard from 1903-93.

In its heyday, Tower 19 witnessed a dramatic increase in east-west rail traffic through the M-K-T (now Union Pacific) side of the interlocking when the Texas & Pacific’s main line through downtown Dallas was truncated in favor of the new “Belt Line” in 1924.

For about half of the tower’s lifetime, tracks were moved using a manual mechanical interlocker machine that was replaced in 1952 by a General Railway & Signal electric “pistol grip” machine. Centralized traffic control (CTC) was added about the same time.

Tower 19 eventually became a part of Dallas Area Rapid Transit’s Red Line, which took on the entire Santa Fe portion of the Paris Branch through East Dallas and Oak Cliff. In 1992, Tower 19 was moved from the west side to the east side of the Santa Fe line to make way for light rail construction where it continued to function for another year.

In 1993, a year after being entered into the Historic American Engineering Record, Tower 19 was officially retired and shuttered. Interlocking functions were transferred to Union Pacific’s dispatching facility in Omaha, NE.