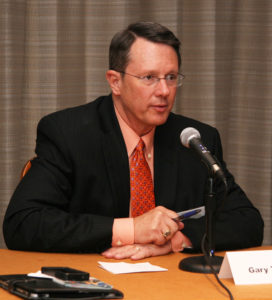 “I am honored to be recognized for doing what I love,” Thomas said. “DART is an integral part of the community, and it’s incredibly fulfilling to see how we are moving people connecting them with education, healthcare and career development.”

Thomas’ nearly 20-year tenure with DART has been marked by several signature moments and comes at a time when the agency is considering a trio of expansion projects. In the last two decades, DART’s rail system has doubled in length twice to 90 miles and reached DFW Airport with the last Orange Line segment in 2014. Also, electric streetcars returned to downtown Dallas last year (in late August, the streetcar was extended to the popular Bishop Arts District of Oak Cliff).

Capital projects, including the South Oak Cliff Blue Line Extension project (SOC-3), have consistently come in under budget and ahead of schedule. SOC-3 will open in October, and add an additional three miles of rail between Ledbetter Station and the new UNT Dallas Station.

Outside of rail, DART’s bus fleet has been converted to compressed natural gas to save money.

Although his accomplishments are many, Thomas said you always have to ask yourself, “What’s next?”

DART appears to already have answers for that question. The agency is eying three projects that include expanding the streetcar network, building a second light-rail line through downtown and extending service to the northern suburbs via its east-west Cotton Belt corridor.

“People need to have transportation choices; therefore, (DART) must continually seek opportunities to enhance connectivity and build an infrastructure that will support current and future riders for decades to come,” Thomas said.

Thomas will be honored at a Sept. 13 award ceremony and luncheon in Los Angeles.