From news releases and online reports
Dallas Area Rapid Transit opened two more rail segments today, extending the Blue Line to Rowlett and the Orange Line farther into Irving and closer to DFW International Airport. DART has built more than 40 miles of track in the last three years to enhance transit accessibility throughout the Dallas area. 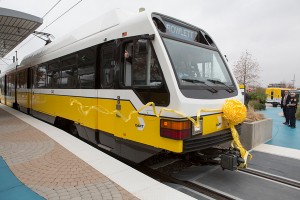 The first Blue Line train arrived at the downtown Rowlett station at 4:20 a.m. At 85 miles, DART Rail is the largest electric light rail system in the nation.

The Downtown Rowlett Station marks the first expansion of the Blue Line since it reached Garland in November 2002. The 4.5-mile, $360 million segment completes the build-out of the northeast corridor and increases access to and from the largely residential community.

“Rowlett residents had the foresight and wisdom to invest in alternatives to driving around this sprawling region,” said John Carter Danish, chair of the DART Board. “They knew public transit was more than an amenity, but a ‘must’ for preserving their city’s small-town charm while also providing access to big-city resources and opportunities.”

New Orange Line stations opened on Monday, including one at North Lake College and another on Belt Line Road in Irving on airport property. The openings marked DART’s first connection to Terminal A at the airport through direct bus services from the stations.

The $1.3 billion Orange Line – the first section of which opened in July with three stations – grew nearly four miles with the new stops. DFW Station, the final stop planned on the current expansion, is scheduled to open in December 2014 at Terminal A. Once complete, DART will join just a few transit agencies in the U.S. with direct rail service into a major airport.

Community and civic leaders are optimistic that DART will pay off in increased visitors and commercial growth, both of which are critical to broadening the city’s tax base. Downtown Rowlett Station’s opening likewise has prompted zoning changes and development guidelines to attract transit-oriented, walkable mixed-use development near the rail station.

In late 2016, DART will lengthen the Blue Line south from Ledbetter Station to connect to the University of North Texas at Dallas.