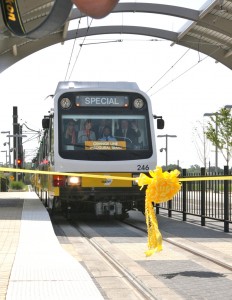 A special DART train with dignitaries and local officials heads in the Irving Convention Center Station before cutting the ribbon that marked the opening of the first phase of the Orange Line expansion that will eventually go to D/FW International Airport.

A special train loaded with dignitaries cut through a yellow ribbon at the Convention Center Station to mark completion of the 4.5-mile section of the $1.3 billion project. The section with three stations opens for revenue service on July 30 and will connect the University of Dallas and the Las Colinas Urban Center along the way. A public event is planned for Saturday.

Dignitaries that included U.S. Senator Kay Bailey Hutchison and Congressman Kenny Marchant said the expansion will further embed North Texas on convention and cultural destination maps and change the face of Irving, which has waited for light rail since it began contributing sales tax in 1984. The Orange Line is scheduled to reach Terminal A at the airport by December 2014.

Hutchison, who has long been a mass transit proponent on Capitol Hill and in 1973 passed the first bill in the Texas Legislature that allows formation of mass transit systems in Texas, said Irving’s patience will pay off in a few years.

“Irving will not be the same city that it is today, because when that line opens in 2014, and you can come to DFW and get off the airplane and come into Las Colinas, Irving, Dallas and all through the system, we are going to be a convention magnet,” she said. “It’s going to be the most rapidly growing part of the North Texas area, mark my words.”

Construction on the second phase has already reached Belt Line Road and SH 161 on airport property. Testing began earlier in July and will run up to the scheduled Dec. 3 launch. A 5.2-mile stretch from Belt Line Station to Terminal A is currently under construction and will open Dec. 15, 2014.

On the eve of the Summer Olympics, DART President/Executive Director Gary Thomas compared the expansion to a gold medal sprint that should further solidify North Texas light rail in the U.S. With nearly five more miles of track, DART extends its distinction of being the country’s longest light rail network to 78 miles.

“When you talk about transit around the country, Dallas hasn’t always been the first place that pops into people’s minds, but it’s getting there,” Thomas said. “It’s getting there because of the reputation that we’ve developed with projects on time, bringing projects in under budget on a consistent basis.”

DART’s anticipated arrival to Irving has spurred construction of luxury apartment communities throughout the Urban Center, with more than 7,000 units existing or planned, and several transit-oriented developments already in the works. The Orange Line extension has under gone more than 12 years of land-use planning by DART, the city of Irving, the Las Colinas Association and the Dallas County Utilities Reclamation District.

When service begins, Irving will become the only city in DART’s service area to have light rail and commuter rail service. The Trinity Railway Express has operated in South Irving since December 1996 along the former Rock Island Railway line.