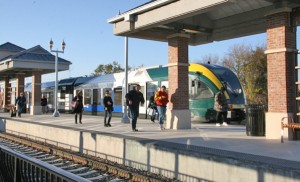 Ridership on Denton County Transportation Authority’s A-train spiked significantly from October to December 2012, giving transit agency officials hope that good things are to come when widening of the I-35 corridor through Denton, TX, begins later this year. – Tim Blackwell/Cowcatcher Magazine

Denton Country Transportation Authority officials hope that increased ridership on the A-train that resulted in 3 percent growth for the agency October-December 2012 is a preview of what will come when construction starts later this year to widen I35 between Dallas and the Red River. According to a fiscal-year, first-quarter report released in February, ridership on the A-train improved 42 percent during the same period compared to the previous fiscal year.

Also, ridership maintained its upward climb in January, with the A-train carrying 43 percent more than in January 2012.

DCTA officials attribute the growth to recent service changes. In August, the agency added midday rail service closing the 9 a.m. to 3 p.m. gap in the schedule, as well as expanding Friday night and Saturday service. In January, a weekday evening southbound departure was added to the schedule to better serve university evening classes and later work schedules.

“Our recent changes were in direct response to customer feedback,” DCTA President Jim Cline said. “Clearly, our customers have responded positively to these changes. As we plan for the next stages of service improvements, we are excited about what the future holds.”

In late February, DCTA staff presented proposed updates to the agency’s five-year operating and capital plan while addressing upcoming widening of I35  to as many as eight lanes from Cooke County to Dallas County. In addition to addressing capital needs and maintenance of the system, the plan focuses on improving the passenger experience with improved amenities and expanded bus and rail services.

Cline says the A-train is in perfect position to offer commuters an alternative when dirt starts flying and until normal traffic resumes on the highway.

“We see the planned expansion of I35 as an opportunity to grow ridership by providing an alternative,” Cline said. “Our next series of improvements will position us to attract and retain the new users.”

While Cline hesitates to project the specific impact of the I-35E project, he feels confident that DCTA can meet commuter rail needs at current scheduling and equipment levels. Trains are made up of two Stadler GTW 2/6 Diesel Multiple Units that have a combined passenger capacity of 400 riders. DCTA operates four of the sets with a fifth as a “hot standby” that could be used if ridership demand exceeds two-car sets.

Stellar performance of the Swiss-built articulated cars have given DCTA officials a high level of operational comfort since the DMUs were placed in service last fall. With the exception of some block detection issues that have been corrected, the cars have operated seamless for the most part and are a hit with riders.

“Passengers love them,” Cline said. “The cars are operating well. Every system has issues, but we seem to be working through those in good step. We’re quite happy.”